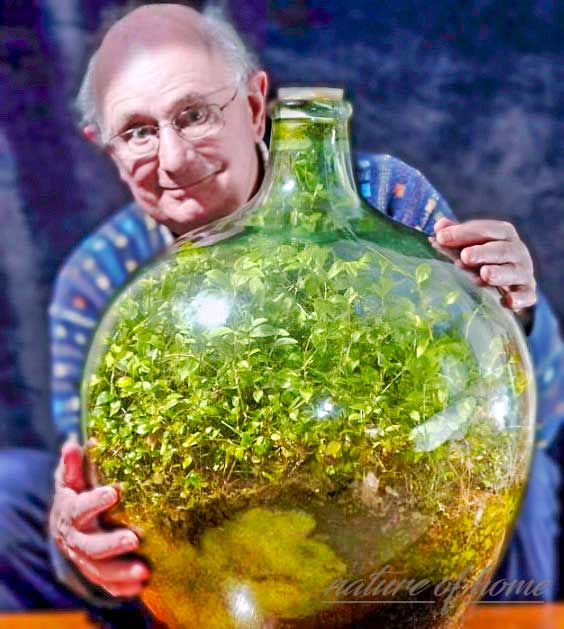 In 1960, David Latimer decided to grow a sealed glass bottle terrarium. He never imagined that it would grow into an incredible research study and be dubbed “the world’s oldest terrarium.”

Over the years, David’s bottle garden was sealed shut but remains healthy and robust as it can be. It has flourishing plant life even though it has not been watered since 1972.

David established the terrarium by placing a quarter pint of compost and water inside the ten-gallon bottle (custom hand-blown glass makers usually make these). He then added spiderworts seeds with the help of a wire. After that, he sealed the bottle and put it in a corner filled with sunlight. Then, let nature do its job through photosynthesis.

Photosynthesis releases oxygen and moisture into the air via plants. The water will then build up and drip onto the plants. The leaves will also fall and rot, releasing carbon dioxide, which the plants require for their food.

It is creating a self-sustaining ecosystem. It’s a stunning illustration of how nature can preserve itself.

Latimer opened the terrarium in 1972 to supply the plants with water. However, it has been sealed with no air or freshwater ever since.

“It’s six feet from a window, so it is exposed to sunlight. As a result, it’s a little more oriented towards the sun and is rotated around now and then to develop uniformly. It’s also the standard for low-maintenance. I’ve never trimmed it. It just appears to have grown to the boundaries in the bottle.”

David’s creation has been featured in the Daily Mail.

The garden has been set in the same room for the past 27 years at the home of the Latimer family (at the time of the interview, it was moved around before that).

It is situated within Cranleigh, Surrey. The town was first made available via BBC Radio 4’s Gardeners Question Time on BBC by Chris Beardshaw. Chris is a TV host and garden designer.

The designer said that David’s sealed garden was the perfect cycle of nature and an excellent illustration of the ability of plants to recycle. And he added that it’s similar to the method NASA is looking into bringing plants and seeds into space.

Saying: “Plants serve as excellent cleaners, eliminating pollution from the air, to ensure that a space station can be self-sustaining.’.

This is an excellent example of how revolutionary plants are and how they can survive if given a chance.

If you’re new to terrariums, let’s start with some background. The name terrarium comes from the Latin words terra(earth), and arium (place). So it’s similar to aquariums but only with earth and plants.

There are two main categories of terrariums:

The first terrarium was created on accident by Nathan Bagshaw Ward.

Ward first became aware of the benefits of hermetically-sealed glass bottles in 1829. He had put a chrysalis from a moth called a sphinx in moist soil on the bottom of the bottle and covered the bottle with a lid. Then, he noticed that a grass and fern seedling had sprouted from dirt the following week.

Incredibly, the evaporated water condensed on the bottles’ walls in the daytime, then returned to the soil at night and maintained constant humidity.

He then adapted this idea for transporting plants across long voyages. The sealed Wardian Case kept the plants moist and alive so they could travel to foreign countries (PDF).

Nowadays, terrariums are used more for decoration and enjoyment rather than travel. Although it still is a great way to transport plants if you’re moving long distances.

As we have said earlier, the sealed terrarium functions by creating a self-sustaining ecosystem. Through photosynthesis, the plants recycle nutrients.

Light is the sole input that is required externally. This is the source of energy needed for food and growth. The light beams off the leaves and is taken into the plant by proteins that contain chlorophylls (green-colored pigment).

Plants store a small amount of light with ATP (adenosine triphosphate) to provide energy. The plant’s roots utilize the rest to remove electrons in water.

The electrons are then free to release oxygen through the conversion of carbon dioxide into carbohydrates by chemical reactions.

To compost organic matter like dead leaves in the ecosystem, it uses the process of cellular respiration. This is performed by bacteria that absorb excess oxygen, release carbon dioxide, and help the plant grow.

The plants also use the same process of cellular respiration to break down the substances it has stored up in the absence of light (during nighttime).

Water is cycled throughout, trapped in the plant’s roots, escaping into the air, and condensed in the potting mix.

The cycle begins anew and continues to repeat itself.

A lot of people are skeptical that David Latimer’s story is factual, and some, such as Bob Flowerdew (organic gardener), think, “It’s wonderful but not for me, thanks. I can’t see the point. I can’t smell it, I can’t eat it.”.

It’s shocking to learn that David feels the same. He says that the bottle garden is pretty dull. It’s not doing anything; however, it is fascinating to him to determine how long it will last.

He plans to pass on the “world’s oldest terrarium” to his children once they are older. Even if they do not have an interest in the meanwhile, if they do not want it, the terrarium will go to the Royal Horticultural Society in London, England.

While this experiment is not explicitly focused on home improvement, it does highlight how a simple project can be brought into the home and connect us with nature.

Also, it would be an excellent conversion piece when the company comes over. Think of the reactions one would get when you say you haven’t watered the terrarium in 50 years!