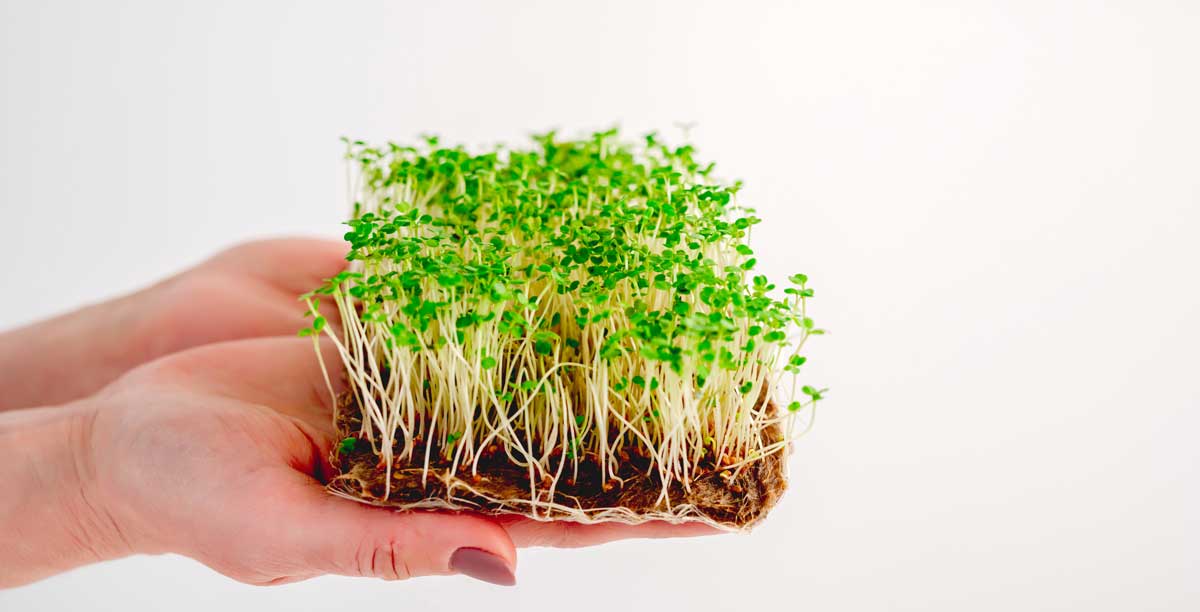 Our roots as people are in the soil. Our relationship with nature is so essential and ancient that it cannot be neglected, even though many of us have lost sight of this significant connection over the past few generations.

We can easily trace our food back to the plants, animals, soil, wind, rain, and sun if we take a moment to pause while we are eating. On farms, all of these things interact with one another. It is impossible to deny the intimate connection between human health and the planet’s health.

This article will cover the health benefits of microgreens, starting with a brief history of produce, then show you how microgreens can save your health and the planet!

Small-Scale to Industrial: Why it Ruined Our Food

Worldwide, traditional agriculture has been practiced for thousands of years. These hand-tended, small-scale farms are highly diverse and expertly managed.

To farm in a way that contributes to and enriches the life of the farm and everything and everyone who interacts with it, diversified farmers make the craft of soil stewardship their direct labor.

The animals are vigilant and have glossy coats. The soil is sweet-smelling, dark, and rich. The plants exhibit little signs of stress and are lush and robust growers. The food produced here helps maintain harmony and good health in the neighborhood.

Everything “feels right” around such a farm and can be felt even by the average bystander.

A farm deviates from this diversified small-farm model further the larger it is in scale and the greater its industrial goals.

The size and emphasis of farming in this nation have gradually changed during the past century. By the end of World War II, many people believed that large-scale traditional industries were superior to small farms.

Chemical fertilizer use in agriculture began at the same time as industrialization. Many materials used to make bombs during the war were converted into fertilizers for crops.

In this period, the idea that farms needed to be huge to benefit from the factory mindset became widespread. Many farmers left the countryside and relocated to the cities to join the expanding industrial trend.

The family farm gradually vanished as large agribusinesses took over.

Over the past century, over 4.5 million farms have been lost in the United States. As a result, the ratio of persons living and working on farms has decreased from 40% to around 1%, according to the U.S. Census Bureau.

The quality of the produce on the market was inevitably compromised as a result of this restructuring of our country’s farms.

USDA statistics show this decline. According to this data, several fruits and vegetables’ mineral and vitamin content decreased between 1950 and 1999.

They discovered “reliable decreases” in the amounts of protein, calcium, phosphorus, iron, riboflavin (vitamin B2), and vitamin C during the previous 50 years.

Davis and his colleagues attribute this diminishing nutritional value to the overwhelming use of agricultural techniques meant to enhance qualities other than nutrition, such as size, growth rate, and insect resistance.

The soil influences the nutritional value of produce it was grown in, how it was harvested, how it was handled after harvest, and how old it is when it reaches your plate.

We must first consider how these factors impact the nutrient content of our product in order to understand how nutrient-dense microgreens are.

Some people have spent their whole lives studying the complicated and wide-ranging interactions between plants and soil.

According to the research, diversity is one of the keys to good soil, leading to healthy plants and animals. This is something traditional farmers have understood for thousands of years.

Crop rotations, composts, soil enhancements, ethical animal husbandry, and the cultivation of an array of vegetables all contribute to the land’s increasing fertility and diversity.

In addition, produce cultivated in healthy soil has a greater capacity to absorb minerals, trace elements, and phytonutrients.

A farm with a strong emphasis on the biology of the soil develops innate resistance to pests and drought and can support life perpetually.

In contrast to what it should be, soil in conventional agriculture has reduced to nothing more than a support for keeping our veggies upright. Sustainable soil management is viewed as poor and inefficient in this model.

Instead, emphasis is placed on broad-spectrum chemical fertilization and large-scale monocultures.

Three water-soluble fertilizers are continuously applied in place of the several soil-enrichment strategies used in this system:

The plant is still visible as green, while the soil appears brown. It seems to be a good, efficient way to manage these undesirable variables.

Unfortunately, when the soil is continued to be neglected, more and more of these hazardous compounds are applied to produce. The chemicals must eventually become so dangerous that using them requires protective clothing and masks.

If you were to look closely beneath the surface at this moment, you would see the demise of biological life and the final death of the soil.

No amount of nitrogen, phosphorus, or potassium will be able to revive the microbial population once it has all been eliminated. Previously rich and productive soil becomes unfit for agricultural use.

Instead of being built upon and strengthened, the soil has evolved into something to be treated. This is reflected in how contemporary medicine treats the human body. A patient’s symptoms are often treated for a long time when we could fix the issue by getting to the source of the problem.

Pests are becoming more powerful as viruses do. We keep upping the dosage only to discover that the issue’s root is still present and that treating the symptoms is becoming more and more challenging.

Some believe that the key to improving human health and agriculture is to take a more holistic approach—looking at the whole person, farm, and planet. The notion that eating well and leading an active lifestyle contribute to human longevity and health is gaining ground in society.

Harvesting Plays a Bigger Role Than You Think

How produce is handled during harvest will affect how quickly its nutritional value declines. The more the plant’s cellular structure is harmed during this process, the quicker the nutrients are lost.

The plant should undergo the least amount of stress during harvest to maintain its nutritional integrity. The coldest part of the day should be used to harvest vegetables one at a time, and they should be refrigerated right away. You can see why scale is crucial in this situation.

Less consideration is given to each vegetable, and the bigger the farm gets the perfect conditions for harvesting it.

The enormous amounts of vegetables that must be harvested frequently outweigh the quality of the produce. On the other hand, the small farmer can carefully harvest each crop, preserving as much of its nutritional value as possible.

Vegetables go through the packing and transportation stage once they have been picked. The temperature at which the food is kept throughout this procedure controls how quickly its nutrients are lost.

Luke LaBorde and Srilatha Pandrangi, researchers at Penn State, provide evidence⁵ to support this. They tested how quickly nutrients disappeared from spinach after harvest.

It demonstrated that spinach loses its nutritional content more quickly the warmer it is kept. Their study revealed that after eight days, most of its nutrients had been lost, even when kept at a constant 39 degrees F (refrigeration temperatures).

According to this research, the bulk of the nutrients in a large portion of the produce that is currently available to us have already been lost.

When it comes to perishable greens, this is especially true. Most of the veggies offered in stores are already several days old, even on the West Coast, where a large portion of the nation’s food is farmed.

You may start to understand why eating locally grown food is so important when considering the additional time it takes to transport across the nation.

With fewer and farther-flung farms, the average time it takes for our produce to travel from the fields to our homes has expanded enormously over the past century.

This has a significant environmental impact due to the need for the consumption of fossil fuels, which affects not only the nutritional value of the produce readily available to us.

You have the opportunity to bring a little bit of the small farm into your own house by growing your microgreens.

You essentially gain a small degree of nutritional independence as a result. Fresh greens are always available to you, even in winter.

You have complete control over every element that can restrict dietary intake. You can pick a soil that has a variety of different ingredients. High-quality soil guarantees that your greens will access a wealth of minerals and trace elements. Plus, you control when you harvest.

During the cooler parts of the day, you can use sharp scissors to preserve the nourishment. You can take what you need from the tray and leave the remainder to continue growing.

You will receive the freshest, most nutrient-dense greens because the packing and transportation process is nonexistent. By giving yourself and your family access to microgreens all year long at a fraction of the cost of store-bought greens, you can take the term “local” to a whole new level.

It might be challenging to eat various high-quality veggies throughout a typical week. Finding fresh local produce in the winter might be extremely difficult.

This has contributed to the rising acceptance of supplements. Due to their hectic schedules, people frequently forgo whole-food nutrition in favor of quick fixes. Nothing surpasses actual food, even though many supplement brands use strategies to attempt and maintain their maximum nutritional content.

Microgreens blend quality and convenience. They offer us the quick and straightforward sustenance we require in our busy life.

These greens’ health advantages don’t end at the moment you eat them.

Your relationship with your food and the ground can be strengthened and deepened by setting aside a short amount of time each week to dig in the dirt, plant some seeds, and watch your greens grow.

Even though it’s frequently disregarded, our spiritual well-being has to be supported. This possibility comes from being a part of something as fundamental as a plant’s life cycle.

We can rediscover our cultural roots and practice good soil stewardship with just one tray of microgreens. But, until we can resume the rhythm of our lives, we might slow down to the pace of plants and savor the more delicate subtleties of water, air, and sunlight.

Studies have revealed that those who consume a diet rich in these veggies have significantly fewer cases of bladder, lung, breast, colon, and ovarian cancer. They include diindolylmethane (DIM), an essential compound for men and women that stabilizes estrogen. Greater resistance to cancer is produced by this compound’s balance, which also promotes general hormone balance.

Specific estrogen metabolites that are present in the body can promote the growth of cancer. DIM inhibits growth by acting as a deactivator.

The effects of the phytonutrient sulforaphane⁷, particularly prevalent in cruciferous vegetables, have also been the subject of substantial research. This potent phytonutrient supports detoxification by accelerating the liver’s natural propensity to cleanse the body.

Unfortunately, it is challenging to consume enough cruciferous vegetables to benefit.

Introducing microgreens- according to studies, one ounce of broccoli around four days after germination has the same quantity of this phytonutrient as 1.5 cups of fully grown broccoli.

Now that you know the health benefits of microgreens, start growing microgreens! Check out this article for a 10-step guide.

1.) ‘They’re Trying to Wipe Us Off the Map.’ Small American Farmers Are Nearing Extinction – Time