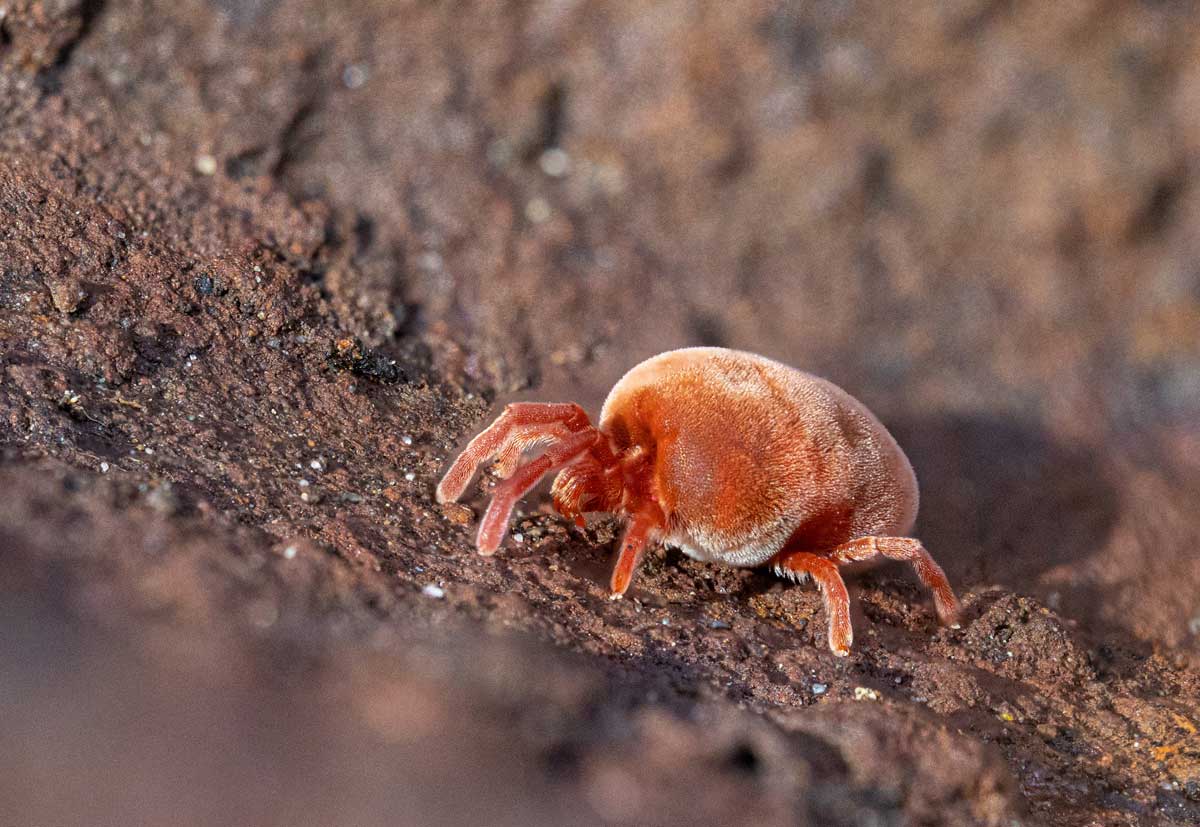 Pest patrol is a duty every gardener must shoulder at some point in the growing season. But before you draw up elaborate plans to fumigate your backyard or douse your potting plants in pesticide, remember: not all bugs are bad.

Some tiny creatures actually perform functions crucial to the health of your soil. Read on to learn about one such creepy crawler, the soil mite.

Soil mites are beneficial arthropods that help break down organic matter in the soil. This can include fungus, leaf litter, algae – basically any naturally occurring item that finds its way onto the ground. Some soil mites even eat very tiny bacteria and nematodes that would otherwise harm soil health.

Biologists have so far identified over 20,000 types of soil mites, and they suspect nearly 80,000 types exist across the globe.

That’s a large number to catalog in a humble blog, so here’s a quick overview of the most commonly found soil mites: Oribatid, Astigmata, Gasamid, and Mesostigmata.

Oribatid soil mites love to eat fungi, so you can often find them near moss and lichen. They typically live three to four years but can live up to seven years in the right conditions. They have a hard exoskeleton, rounded like a beetle’s. For this reason, they’re also called beetle mites or turtle mites.

Regardless of type, soil mites are tiny, measuring no more than a few millimeters. If you are able to see them, they will look like small white dots, moving slowly through the soil.

In many cases, you won’t be able to see them without a microscope, much less distinguish specific features.

Look Out for the Little Guy

Soil mites love organic matter. You’ll likely find them in your compost bin. It’s also possible you’ll find them in a bag of Miracle-Gro potting soil – even if freshly opened.

Assuming you have healthy soil, you will find soil mites already existing in your garden, whether you have a raised garden bed, vegetable garden, or flower bed.

Soil mites are so small it can be hard to identify them based solely on appearance. However, it is still possible to identify whether or not your soil’s new inhabitant is a soil mite or something peskier.

So before you start wildly spraying pesticides, pay attention to some common sense clues for identifying critters commonly confused with soil mites.

The Good, The Bad, The Mite-y

While it’s tempting to classify all bugs as bad, resist the desire to eradicate soil mites. They do not cause damage but actually provide many benefits.

Soil mites perform a vital role in decomposition, a process crucial to maintaining soil health. They eat ‘break down plant and animal residue’ and eat fungi and bacteria.

After feeding, the mites produce fecal pellets. These pellets provide additional benefits to the soil.

Even upon their death, soil mites continue to aid the soil with their beneficial decomposition process.

Ecosystems are complex, so assessing whether or not soil mites are “bad” is a little too reductive. But whether you’re the proud parent to barefooted backyard children or an ever-expanding series of succulents, it’s valid to wonder if soil mites cause harm.

Remember: we’re talking specifically about soil mites. Other mites can be peskier, but that’s for another day.

Soil mites can carry bacteria, diseases, or tapeworms. But before you start panicking, keep reading. Again, unless you consume the soil in which they live, soil mites will not transmit diseases to you – a human who shouldn’t eat soil.

Tapeworm-carrying soil mites are a more significant concern for horse pastures. This is because tapeworms require an “intermediate host” to survive. Unfortunately, soil mites sometimes become this host.

When already infected horses excrete the eggs of tapeworms into the soil, soil mites munch up these eggs. This is because the eggs develop within the soil mites. And since soil mites live in grass and soil, they are easily consumed by grazing horses.

If your dog or cat occasionally munches on some grass, they could also consume these tapeworms.

It is more likely that your dog will suffer from mite bites. However, the cluster of small red bumps bugging your pup is probably the fault of spider mites, not soil mites.

How to Get Rid of Soil Mites

Wondering if you should get rid of soil mites? The short answer: don’t.

Remember, pesticides rarely affect just one organism, even if they claim to target a specific insect. For instance, applying a soil drench to eradicate harmful soil dwellers will also kill the beneficial mites.

Options such as miticidal soap are targeted specifically at mites. But these sprays can actually kill or weaken plants, so spray carefully.

In rare cases, soil mites might increase in numbers to the extent that you can see them in indoor containers and house plants. (This is unlikely thanks to the mites’ slow reproduction rate.)

Even if you find soil mites on your precious orchid or peace lily, don’t panic. These mites won’t do any harm. Like the soil mites you find around outdoor plants, soil mites are not harmful to indoor plants.

But if you’re feeling squeamish, the best method is natural control. Simply re-pot the affected plant. Add the soil containing mites to your compost heap, and those tiny guys will get to work.

Hopefully, you’ve held off on killing your soil mites. Maybe you’ve even come around to liking the little guys.

But what if you’re worried your garden doesn’t contain soil mites? You can purchase soil mites from home and garden stores. Whether you want to decrease your spider mite population or increase your humus health, introducing soil mites to your garden is the way to grow.

ABUNDANCE AND DIVERSITY OF SOIL MITES (ACARI) ALONG A GRADIENT OF LAND USE TYPES IN TAITA TAVETA, KENYA – PDF

Can You Reuse Microgreen Soil? (The Perfect Solution)
Matching Soil & Plants = Thriving Landscape
How to Make Soil More Alkaline: 4 Steps
How to Make Soil Acidic
Share on TwitterShare on FacebookShare on PinterestShare on LinkedIn