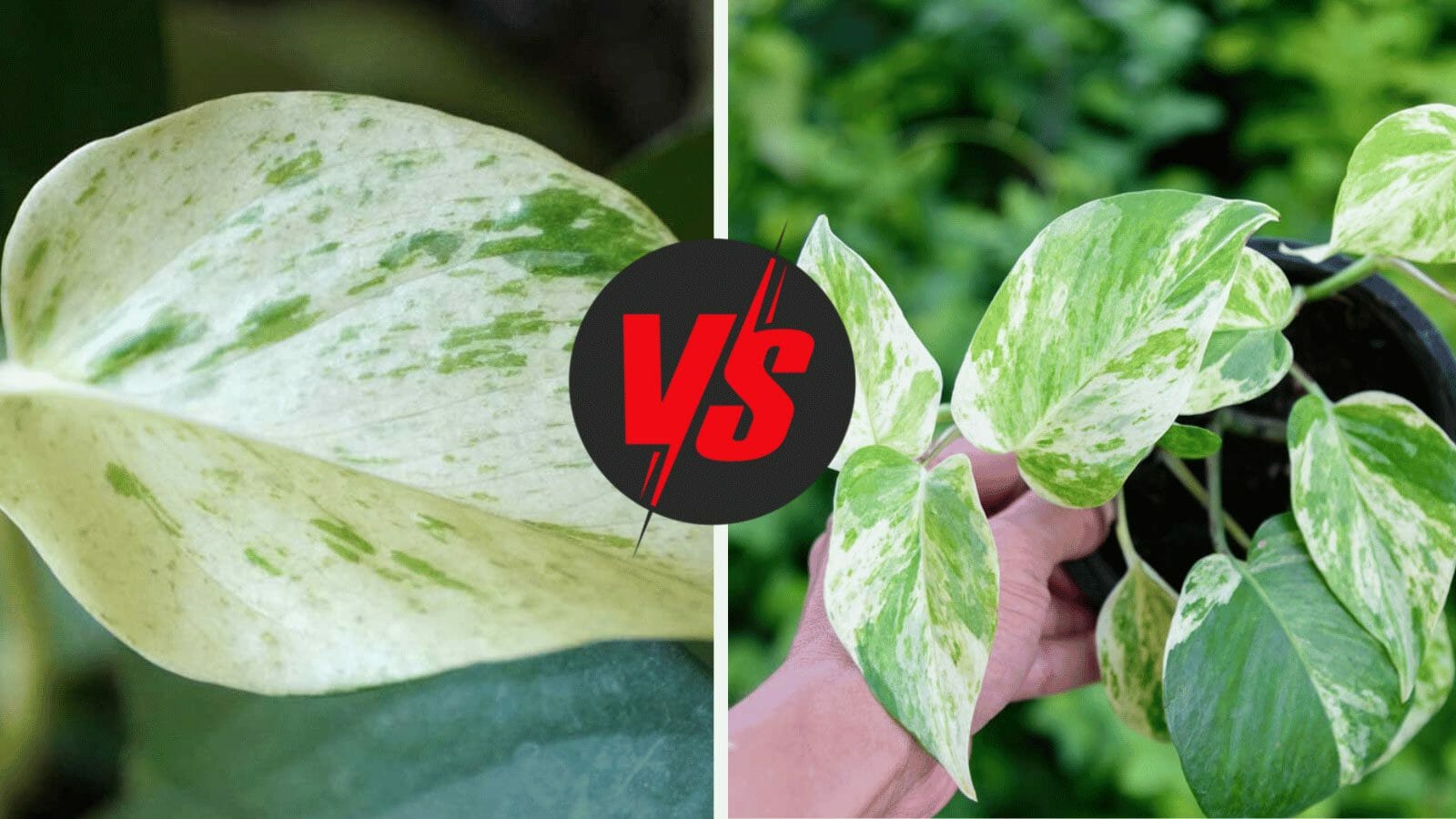 Marble Queen and Snow Queen are both beautiful, highly variegated cultivars of Pothos or Devil’s Ivy. They are so similar that many have asked about the differences or whether they are even the same plant.

The answer is that they are indeed two different Pothos cultivars – Epipremnum aureum’ Marble Queen’, and Epipremnum aureum’ Snow Queen’. The differences have to do with the amount of variegation in the leaves, which in turn affects the leaves’ size, the plant’s growth rate, and the type of care they need.

These plants are graceful vines with heart-shaped leaves with pointed tips, cylindrical stems, and a waxy texture. When comparing Snow Queen vs Marble Queen pothos, the most significant visible difference between the two is the size of the leaves and the amount and pattern of variegation.

Of the two plants, Marble Queen has more green in its leaves. True to its name, its leaves have a marbled appearance of about 50% green and 50% creamy white color.

The mottling covers the leaves in various shades of green, from medium to light green, as an overlay on the cream-colored background. In addition, its leaves are generally larger than Snow Queen’s.

Snow Queen has considerably more variegation in its leaves than Marble Queen.

Its glossy leaves are mostly white with irregular, random splashes of green and are slightly more pointed than Marble Queen’s. They have about 20% green and 80% white variegation.

Variegation matters. The green color in the foliage and stems of Pothos plants contains chlorophyll which captures sunlight that the plants use in photosynthesis, the food-making activity of the plant.

The amount of variegation affects their ability to photosynthesize and make food for their growth. This directly determines the amount of light and water they need, the size of the pot and amount of soil they need, and ultimately, their growth rate.

Since Marble Queen has more green chlorophyll in its leaves than Snow Queen, it can photosynthesize at a higher rate and grow more quickly.

Marble Queen and Snow Queen can grow up to 10 feet long or more indoors if they’re not pruned back, but it will take Snow Queen longer to reach the same length since it grows more slowly.

Snow Queen’s slower growth rate has its advantages as a houseplant. It grows in a more compact form, and it will not need to be pruned back as frequently.

Both Queens are beautiful in a hanging basket or climbing up a moss pole with their aerial roots.

Marble Queen can capture more light energy for photosynthesis than Snow Queen since it has more green chlorophyll in its leaves.

As a result, Marble Queen can grow well in low to moderate indirect light, whereas Snow Queen needs brighter light to compensate for its smaller amount of chlorophyll.

Snow Queen will grow happily and keep its beautiful variegation in bright indirect light, out of the direct sunlight that can burn its delicate, white leaves.

However, since variegation is unstable, it’s vital to give Snow Queen enough light, or it’s likely to revert to an all-green form to capture enough rays for its growth in low-light conditions.

Marble Queen and Snow Queen grow well in average household temperatures of 65 to 75 degrees F. They can tolerate temperatures up to 90 but will die at temperatures below 50 degrees.

Both Pothos varieties can tolerate household humidity levels of 30% to 40% but will grow best in 40% to 60% humidity.

You can boost the level by using a humidifier or by setting your plant on a pebble tray with water, making sure that the bottom of the pot is above the water line.

Provide the plants with loose, well-draining potting mix, such as cactus or succulent soil, with sand, perlite, and orchid bark added for increased drainage.

Marble Queen will need more soil and a larger pot than Snow Queen since it can use more nutrients. A larger pot means more soil, nutrients, and moisture for the plant.

With its faster growth rate, Marble Queen will need to be watered a little more frequently, about once a week. Snow Queen will only need watering about once every ten days to two weeks since it won’t use the water up as quickly.

Allow the soil to dry down one or two inches from the top before watering.

The amount of water needed will vary with the seasons. For example, your plant will require more water in the spring and summer when it’s actively growing and much less water in the fall and winter when it grows more slowly or not at all.

When you water your plant, make sure it can run out of the drainage hole and not collect in the bottom of the pot.

Root rot and yellowing leaves can occur if the roots are allowed to sit in water from overwatering and poor drainage.

Variegated plants are often more sensitive to the minerals and chemicals in tap water. Therefore, it’s healthier for both Pothos cultivars to be watered with distilled or rainwater.

Be careful when you fertilize your Pothos.

Both Queens can be fertilized with a dilute houseplant fertilizer with a lower nitrogen content in the N-P-K ratio.

A high nitrogen content could cause the leaves to have a higher percentage of green color and could also cause the roots to be less able to absorb water.

Marble Queen can be fed sparingly once a month during the spring, summer, and early fall, but Snow Queen will only need to be fertilized twice during the growing season.

Variegated plants tend to be more susceptible to pests than all-green plants. Watch out for spider mites, aphids, and mealybugs which can be controlled with insecticidal soap and/or Neem oil.

Scale insects are another pest of Pothos and can be hosed off, then wiped with alcohol.

When your Marble Queen or Snow Queen grows too long, you can prune it with sharp scissors or shears right above a node, which is where a leaf attaches to the stem.

You can use the lengths of stem cuttings you pruned for propagation if you want to grow more plants. Roots will grow from the nodes, so ensure several nodes on the stem.

Place the cuttings in a clean jar with fresh water and remove the leaves below the water line.

Keep the jar in a warm, bright location until the roots grow to two or three inches long. When they reach that length, they’re ready to be planted in a clean, fresh potting mix.

Leaf cuttings from variegated plants often produce all-green growth, so it’s better to use stem cuttings to retain the variegation.

Marble Queen and Snow Queen Pothos are members of the Arum family, all of which are toxic to people and pets such as cats, dogs, and even reptiles. Keep all members of your family safe by setting your plants out of the reach of little ones and furry friends.

Hawaiian Pothos: How To Grow a Giant Pothos Indoors
Emerald Pothos: The Green Beauty (Plant Care Guide & Tips)
Pothos Has Brown Stems: 7 Causes, How to Prevent & Fixing
Repotting Pothos: When & How to Repot Your Plant: Like a Pro
Silvery Ann Pothos: An Elusive Beauty That's Really Scindapsus pictus
Glacier Pothos vs NJoy: Tell Them Apart + Pro Care Tips
Why Is My Pothos Not Growing? (8 Causes + Simple Solutions)
Pothos N Joy vs Pearls and Jade: 7 Differences + Care Tips
Lemon Lime Pothos: Vibrant Color That Makes a Statement
Pothos Dying? Reasons Why + How to Revive & Save Your Plant
RootBound Pothos: 5 Major Signs & How to Fix + Prevent
Why Is Your Pothos Dripping Water? 3 Reasons & What To Do
Do Pothos Flower? How These Plants Mysteriously Bloom
Pothos Fertilizer: Best Way to Turn Your Plant Into a Beauty
Can Pothos Live Outside / Plant Survive Outdoors? (Answered)
9 Simple Tips: How to Make Pothos Grow Faster ~ Like a Pro

Nancy has been a plant person from an early age. That interest blossomed into a bachelor’s in biology from Elmira College and a master’s degree in horticulture and communications from the University of Kentucky. Nancy worked in plant taxonomy at the University of Florida and the L. H. Bailey Hortorium at Cornell University, and wrote and edited gardening books at Rodale Press in Emmaus, PA. Her interests are plant identification, gardening, hiking, and reading.