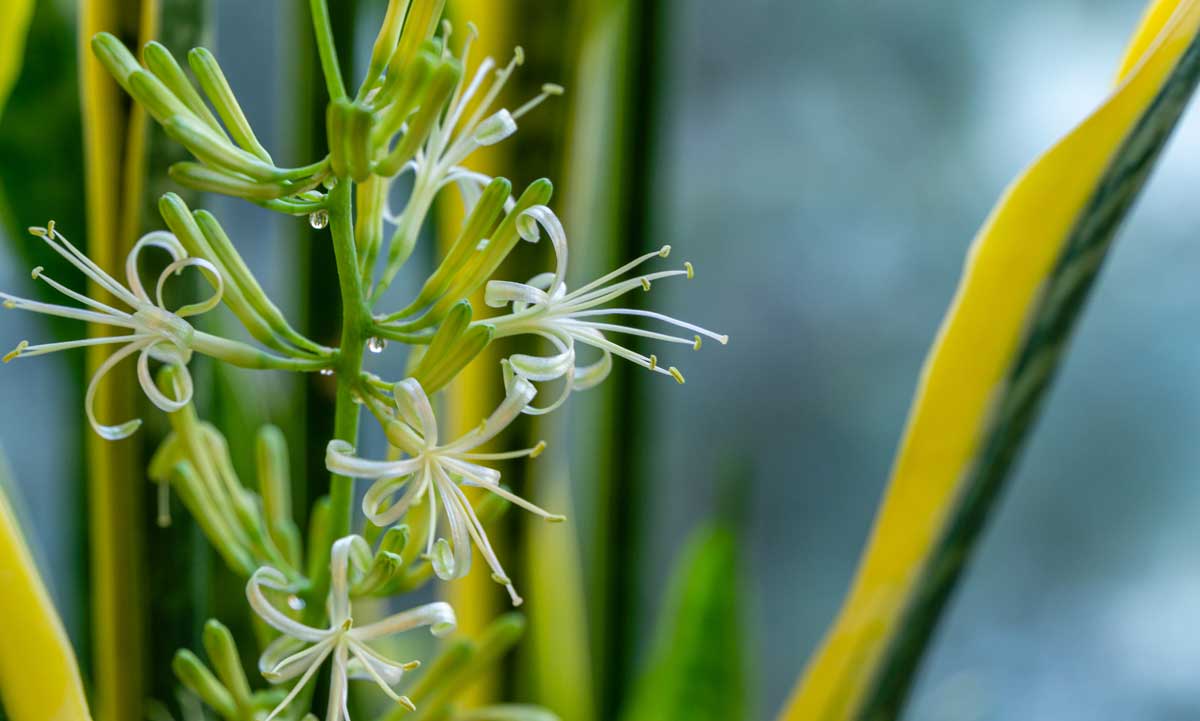 People love snake plants due to their low maintenance, sharp, pointed leaves, and ability to survive indoors and out (depending on the USDA growing zone).

Many homeowners are often puzzled to see a snake plant flower. While it is often a rare sighting and usually only happens once a year (typically in the spring), it does happen. Although, it is possible to have one never flower at all. This could be because of the variety you have or growing conditions.

This article will cover the meaning of flowering snake plants, their appearance, how to make your plant bloom, and what happens afterward. We will also cover some safety info you won’t want to miss.

Meaning of a Flowering Snake Plant

Most people think flowering is a good thing. But, that is not always the case. For example, when snake plants are in bright lighting and have minimal water, they often get stressed. This causes the plant to think it might be dying due to drought.

So, it then starts to create flowers that turn into seeds. The seeds will then take root, and the species will continue to grow.

Getting a snake plant to flower is not common, so yes, it can be a lucky sign that yours bloomed. But, more so, these plants are considered good luck because of their ability to filter toxins from the air rather than flowering.

Some people even think with the good luck associated with snake plants; the plant will attract money. If this is your goal, you should check out the Money tree. It has more meaning to money than a snake plant.

A long flower stalk is typically seen when a snake plant starts blooming, covered in flower buds that grow in clusters with thin petals. These flowers look like honeysuckle or small lily flowers. The evergreen perennial can grow as tall as 3 ft high with erect flower stalks or spikes; however, some snake plants don’t produce stalks.

Other varieties are white, yellow, light green, or white with lavender. While snake plants rarely bloom, when they do, their blooms are usually striking and fragrant.

How Often Does a Snake Plant Flower?

As earlier stated, snake plants seldom bloom, and it happens once a year, especially in spring. The flowers can last a few weeks, producing berries before they die. While it can flower yearly, you can’t tell when it will bloom, and a rosette that has previously borne flowers will not produce more flowers.

Each blooming season begins with flowers growing on a new stalk. After blooming, you can prune the stalk from the plant’s base. Doing this will help the plant maintain a neat appearance.

Are The Flowers Fragrant?

Snake plant flowers have a strong fragrance at night, and this is due to blossoms closing during the day and opening in the dark. They usually release a spicy vanilla-like scent which is inconspicuous, and this fragrance varies among species.

While blooming is rare and induced by stress, you may assume that flowering is bad for your snake plant. However, there are no studies or facts about flowering harming them.

How to Make Snake Plants Flower

While snake plants are tolerant and thrive under harsh conditions, they may not blossom. You can induce flowering in snake plants by keeping them in a root-bound stage, reducing watering, and exposing them to lots of sunlight.

The following factors can stimulate flowering in snake plants.

Bright, indirect light favors the blooming of snake plants. As much as possible, avoid exposing the plant to direct sunlight since this can be detrimental to the plant’s growth. If you’re growing the plant indoors, it’s best to place it close to the window or in the corner of your room.

Snake plants are succulent plants that store water in their leaves and require a small amount of water to thrive. Regular watering can cause the plant to rot; only water once a week and less during winter. Allow soil dry in between before watering again.

Also, since it’s their growing season, you might need to water the Dracaena plant more during spring and fall. You should grow your plant outdoors if you reside in a tropical region as they receive abundant rainfall.

Ensure the soil is well-drained so roots don’t become waterlogged.

Also, move plants indoors during winter since freezing temperatures can harm plants, leading to their death.

Leave the plant indoors till spring while placing it under indirect light. Temperature ranging from 55 – 85℉ is suitable for snake plants.

It is widely believed that snake plants bloom when they’re slightly stressed. Being stressed means they’re not given full attention, are exposed to high light intensity, and watered less. Over time, plants will spread rapidly and become root-bound, allowing new shoots to spring forth.

Propagation sets in, inducing flowering, but this doesn’t confirm that your plant will bloom when potted because other factors like soil, location, and soil influence flowering.

On the other hand, pot condition affects blooming; therefore, ensure you grow snake plants in a well-drained pot, preferably a terracotta pot that supports evaporation.

A light, well-drained soil is best suited for growing snake plants, but you can use a potting mix or DIY soil-based medium. While snake plants don’t require many nutrients to grow, adding compost or manure to soil accelerates flowering.

Ensure you don’t use excess fertilizer as it can negatively affect the plant, leading to death.

There’s no definite age for snake plants to start blooming. Generally, new and young plants rarely flower, but the old plants have a greater chance of blooming under the right conditions.

Other than this, some plants won’t bloom in the first season even after exposing them to a conducive climate or condition. If you’re looking to grow a snake plant, you should choose a mature one.

Are The Flowers Poisonous?

Although it has little effect on humans, snake plants are poisonous when ingested, causing nausea and vomiting. Snake plants contain saponins, which are used for producing insecticides and fungicides.

These chemicals are dangerous to humans, making them susceptible to developing allergies. In addition, babies and pets should avoid playing with the plant, especially the flowers, long stems, leaves, and berries.

Will The Plant Die After It Flowers?

While it is true that snake plants typically bloom under stress, as long as you keep taking proper care, they should not die. The blooms will turn into orange berries.