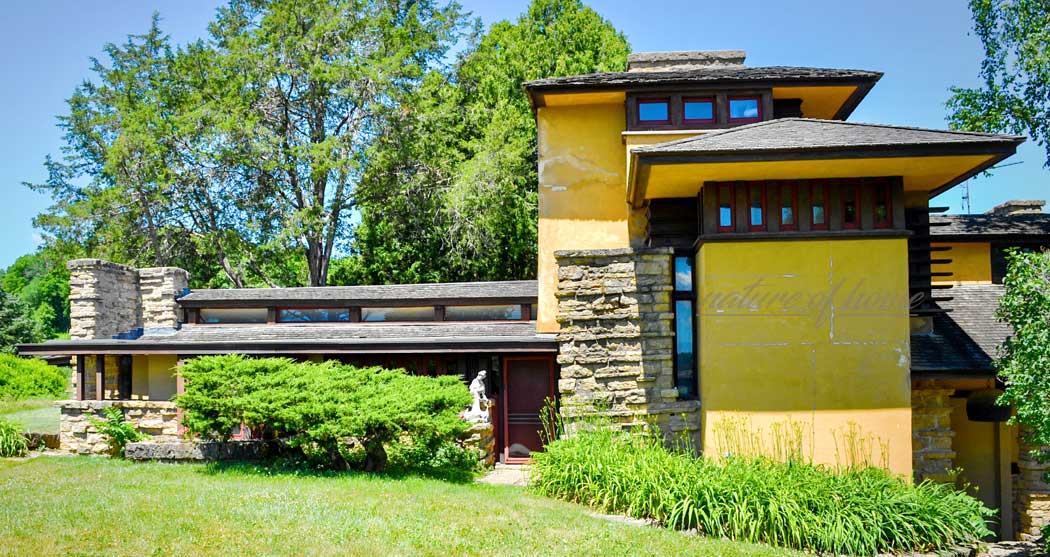 A roof overhang is not just for looks. Properly designed overhangs will shade windows in the summer, allow the sun in during the winter, and keep the rain away from the building. And when you can keep rain from entering doors, windows, siding, and foundations the less chance of moisture problems.

Can you imagine standing in the rain at the front door of a no-overhang house, waiting to be let in, or waiting till someone finds a key?

It would be a dumb design not to have an overhang and create other weaknesses.

Without a proper overhang, a house will get wet when windows are left open in the rain. The building materials in the weather with no protection from sunlight and rain will deteriorate much faster than with a sheltering overhang designed to suit the house.

A well-designed roof overhang will look inviting, protected, and secure.  That’s what houses are supposed to be.

What is a Roof Overhang

The term roof overhang is how far the roof’s edge extends over the home’s siding. The majority of homes have an overhang, but the length can vary dependent on the style of the roof, as some have more extended overhangs.

When speaking about the roof’s overhang, the correct term is “the roof’s eaves.” The eaves refer to the space which extends from the wall’s surface to the edge of the roof.

Roof overhangs are classified into three groups based on the eaves’ position at the edge.

Open roof eaves extend out from the wall, usually 12″ or more, showing the roofing structure. An exposed roof beam or lumber is a beautiful design.

A closed roof eave is a type you will most likely find in homes constructed in areas with warmer climates. This roof type has a minimal overhang and can appear as only a small extension over the house’s siding. Sometimes, there is even no overhang at all.

The boxed roof eaves are enclosed around the perimeter. The soffit is located under the overhang structure and is usually used in vented eaves for attic ventilation.

Why Overhangs on Roofs Are Important

An overhanging roofs most important job is to keep water away from the windows, doors, foundation, and siding.

While it’s not possible to prevent the rain driven by the wind from getting to your walls, large overhangs on the roof can make a huge impact, especially in the case of just one story beneath the overhang.

In reality, an overhang attempting to shield more than two stories is not effective in maintaining the dryness of the building. (Fortunately, it is possible to solve this issue, which can be done by adding a “brow roof” above the first floor. Read on to learn more about brow roofs).

The walls with adequate roof overhangs aren’t as problematic as walls that are regularly wet by small overhangs. The repeated wetting events create a range of issues. While these issues are more prevalent when the climate is prone to heavy rain than in low-rainfall areas, most North American homes are built in the regions that make sense to shield walls from the full force of rain driven by wind.

Doors and windows can be protected by roof overhangs, recessing doors and windows in dense walls, or incorporating head flashing and head casing to stand out over the plane of siding.

Looking at older buildings, it is common to see that the window head casing and door head are extensive and usually covered with an extended ledger. These features help deflect rain.

There are two main reasons why all doors on the exterior must be sheltered with a roof: ensure that jambs are not rotting and keep guests dry until homeowners respond to the doorbell. Even though these rules are evident, many exterior doors are built with poorly designed roofing overhangs.

A house with no overhangs leaves siding exposed and vulnerable, just like an abandoned zebra released close to a pride of lions.

Walls that are not protected suffer high levels of water ingress, premature failure of any stain or paint, and decreased lifespan of the siding.

Another reason for large eave extensions is to make sure roof water doesn’t run into the foundation. Eaves have the ability to keep water away from your home to keep your basement or crawl space dry.

Ensuring that the eaves do not cause splash on your home reduces the harm resulting from the splashback. Splashback is the most common cause of siding decay.

It happens by rains draining over the roof’s edge and onto the ground. When it hits the ground, it creates a splash. This is what gets onto the siding.

By having a good-sized overhanging roof, the splash will happen further away from the siding and not hit the house.

To highlight the points above, a study done in the 1990s in Canada looked at different factors that led to the building problems of 46 residential buildings. Of which 37 had moisture-based problems.

The study looked at:

After they looked at 72 walls in the 46 buildings, researchers realized the connection between moisture issues with overhangs on houses.

Think of roof overhangs as holding an umbrella in the rain. You want to keep it just high enough above your head, with extended sides far enough away from you. This keeps you nice and dry. If you hold the umbrella up with your arm extended, it won’t do much good, just like if it was not very wide.

The more a roof overhangs a wall, the less critical flashing becomes. This is good because sometimes installers make mistakes, or materials like tape wear out over time.

People use a space if it is sunny and don’t use it if it is not, in all but hot climates.

The next main benefit of a roof overhang is controlling window shading. This is essential. An adequately sized overhanging roof can make a huge difference in comfort and energy efficiency.

In colder conditions, any shade that falls on your windows could be unwise; however, shade is generally welcomed in summer. Because shade can be good and occasionally bad, Window shading strategies are usually the result of balancing the location and size of overhangs on houses.

The sun’s rays hit the windows of the east and west at the time of day when sunlight is lower in the sky. It isn’t easy to control this horizontal sun.

The risk of overheating is more significant in the late afternoon rather than early morning.

Therefore, west-facing windows can be the most difficult to maintain, especially in hot climates. In hot climates, windows facing west should be kept to a minimum or eliminated.

North windows don’t receive much sun in the northern hemisphere, so roof overhangs aren’t a problem for north windows. But, if you are striving for an energy-efficient home, you should limit the amount of glazing on the north.

The north side of a home is often the least used as it is the cold and dark part of a home.

The roof overhang length is more critical on the south-facing side than on any other side.

Suppose you plan to adhere to the traditional passive solar design guidelines, and it generally is sensible to do so.

Although this is the design purpose, the outcome isn’t the best. One reason is that the sun’s path takes a shorter route across the sky in July and August than in the latter part of June.

As a result, more sun can get into the home in the latter parts of summer when it’s still hot.

The attempt to balance solar heat gain through buildings’ windows against the outdoor temperature faces an unsurmountable challenge: the planetary flywheel effect. This phenomenon causes an interval between peak insolation and high temperatures outdoors.

The same issue occurs during all seasons. The sun is lower in the sky between 10:00 a.m. and 10:00 p.m. than noon. Even if windows facing south are wholly shaded by noon, they could be exposed to unwanted sunlight at 2:00 p.m.

Although it is challenging to get perfect shading for windows, traditional passive solar guidelines should be used to design overhang roofs. A helpful online tool to assist designers in this endeavor can be used. (A free roof overhang design program that a Seattle firm offers, Sustainable By Design.)

If you’re trying to find a perfect balance between solar heat gain and shading, it is possible to tweak the south-facing overhang of your home to get the outcomes you want.

In hot climates, it is possible to extend your roof’s overhang a bit to allow shade during the summer months, and if you reside in a cold environment, you may want to cut down the roof overhang.

After listing a few reasons roof overhangs are crucial, We can now look at the roof design strategies.

In the latter half of the 20th century, the architects that accepted modern design principles frequently advocated houses with flat roofs with the absence of roof overhangs.

Unfortunately, this poor design style has not entirely died.

Frank Lloyd Wright is partly to blame for the popularity of flat roofs. It’s important to note. However, it’s possible to adapt the contemporary style to allow a roof with ample overhangs. Which Frank often did quite well.

Gable-end overhangs, that is, rake-overhangs, extend up to the top of the roof. Because the top is far away from the bottom on the wall, they are less effective than other overhangs.

One option is a prow roof overhang. Although this kind of gable-end overhang does better at protecting walls than most rakes, some aren’t a fan of the design of the prow roof.

An alternative is making the rake’s overhang larger than usual. The success of this method will depend on the exposure of the wall.

The roof overhangs of two-story homes are usually at a minimum of 17 feet over the lowest siding courses, which means they typically fail to shield walls from the rain.

This is why two-story dwellings usually require a roof for each floor.

The most popular solution is an eyebrow roof overhang- a long covered shed or a roof with a hipped design attached to the wall to be at the same level as the first-floor ceiling.

If the brow roof is designed to shade south-facing windows during the latter part of June, it could conform to passive solar design principles and help protect the wall from the rain.

Pioneered by Frank Lloyd Wright, the cantilever roof overhang is the most advanced. It will require an experienced structural engineer and home builder as the overhang is built into the structure, usually with steel beams. Then, filled in with wood framing.

There are at minimum four options for protecting doors that include creating the overhang of the main roof large enough to cover the door; integrating a gable or cricket into the main roof to guard the entrance by making an accessible entry, and securing the “mini-roof” to the wall over the door. (“Mini-roof” just means a gable or shed roof that shields the exterior door.)

After a couple of years, the lower portions of jambs on doors that are not protected begin to turn brown. Handymans and carpenters earn an income from fixing these jambs that have started to rot.

If you do not want to cover your doors with an overhang from the roof, ensure that your doors are set away from the outside, inside the walls.

A properly designed roof overhang will let the sunshine in when desired, block it when it’s not, keep the rain away from the building materials, and make your home last longer and look better.

Not to mention overhangs on roofs can greatly increase energy efficiency.

Just make sure they are correctly engineered to prevent wind uplift.