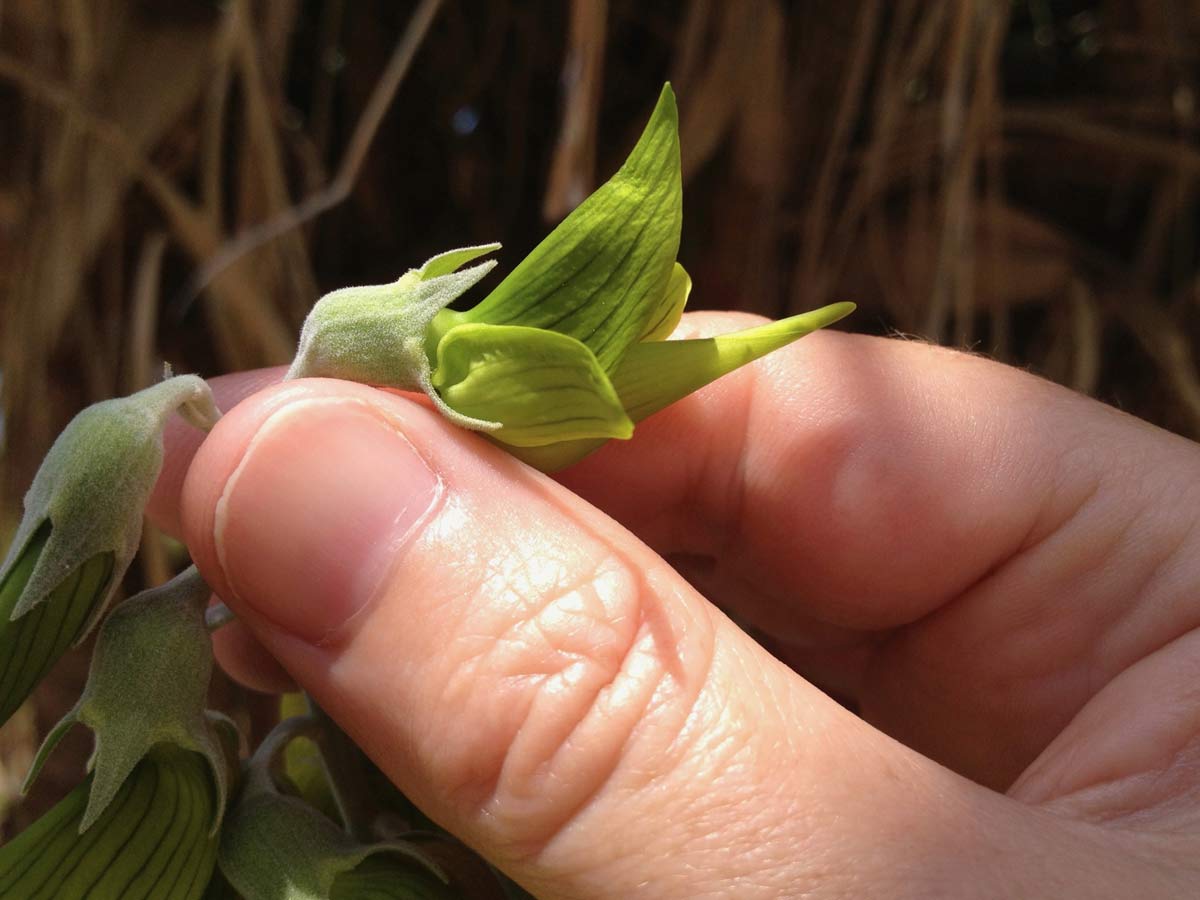 Not so very long ago, the Internet was once the domain of cats – cute, cuddly, or grumpy. But now the people click for plants. Amongst the succulents and pothos, a little-known shrub called the Crotalaria cunninghamii recently blossomed into popularity.

Let’s take a closer look at the green birdflower plant, or Crotalaria cunninghamii. This article will survey the plant’s habitat, uses, and growing preferences. Plus, we’ll consider whether or not a plant would evolve to look like a bird.

Unless you’re a botanist, you probably know the Crotalaria cunninghamii shrub by another name: the green birdflower.

It is also sometimes referred to as the regal birdflower or parrot pea. The latter name no doubt references the fact that this shrub is part of the legume family.

The green birdflower is an upright shrub that grows up to three meters tall. It produces greenish-gray leaves on thin, velvety branches.

But it’s the shrub’s flower that has grabbed the Internet’s attention. The plant produces brightly colored yellow-green pea flowers – some of which have purple streaks.

From certain angles, these flowers resemble the shape of a hummingbird. The “beak” occurs where the flower meets the stem.

The green birdflower produces these blooms from January to April – or even longer in its natural habitat.

The genus Crotalaria gets its name from the Greek word for rattle, reflecting the sound that the seeds make when the wind rustles the pods.

The green birdflower is native to Australia, where it enjoys semi-arid and tropical zones.

In the wild, the green birdflower thrives in coastal and desert regions. It often grows in well-drained soil, such as those found on dunes, sandplains, shrubland, grassland, savannah woodlands, and drainage lines.

The green birdflower also grows in Mulga communities. Mulga communities are resource havens in otherwise arid regions. These areas make up 20% of the land mass in arid Australia. They are particularly associated with the Western Australian rangelands.

Can You Grow Regal Birdflower in the United States?

The green birdflower does not tolerate cold weather, so its growth is somewhat limited in the US. If you’re interested in growing this beautiful plant, check your USDA Plant Hardiness Zone.

Most of these zones occur in the southern parts of Florida, Texas, Arizona, and California. The islands of Hawaii also host these zones.

Since the green birdflower originated in remote desert regions, little research exists about this plant. A fact that has not, of course, stopped the internet from drawing its own conclusions.

This theory relies on some kind of ecological interaction between hummingbirds and the green birdflower. But hummingbirds don’t currently live in Australia. And they never have.

So it’s more likely that this is simply a case of optical illusion.

Crotalaria cunninghamii gets its name from Allan Cunningham, the botanical collector who first recorded the plant sometime between 1816 and 1839.

But the First Peoples of Australia knew about mangarr, as they named the plant, long before the 19th century.

And according to information collected in the 2016 pamphlet Traditional Ecological Knowledge of Nyangumarta Warrarn Indigenous Protected Area, the green birdflower had practical uses.

The Nyangumarta people used the plant’s soft bark to make sandals. Despite its thinness, this bark is strong and flexible. When tied around a foot, it protected skin from the hot sand.

The bark’s inner softness was also used as a wrap to relieve headaches and other pains.

Other reports suggest that sap from the green birdflower was used to heal eye infections.

Thinking about growing your own green birdflower shrub? Check out these growing tips.

Remember, the green birdflower will grow in the US, but it needs to be in hardiness zones 10 or 11. Frost, mold, and winter rotting will damage this warm-weather plant.