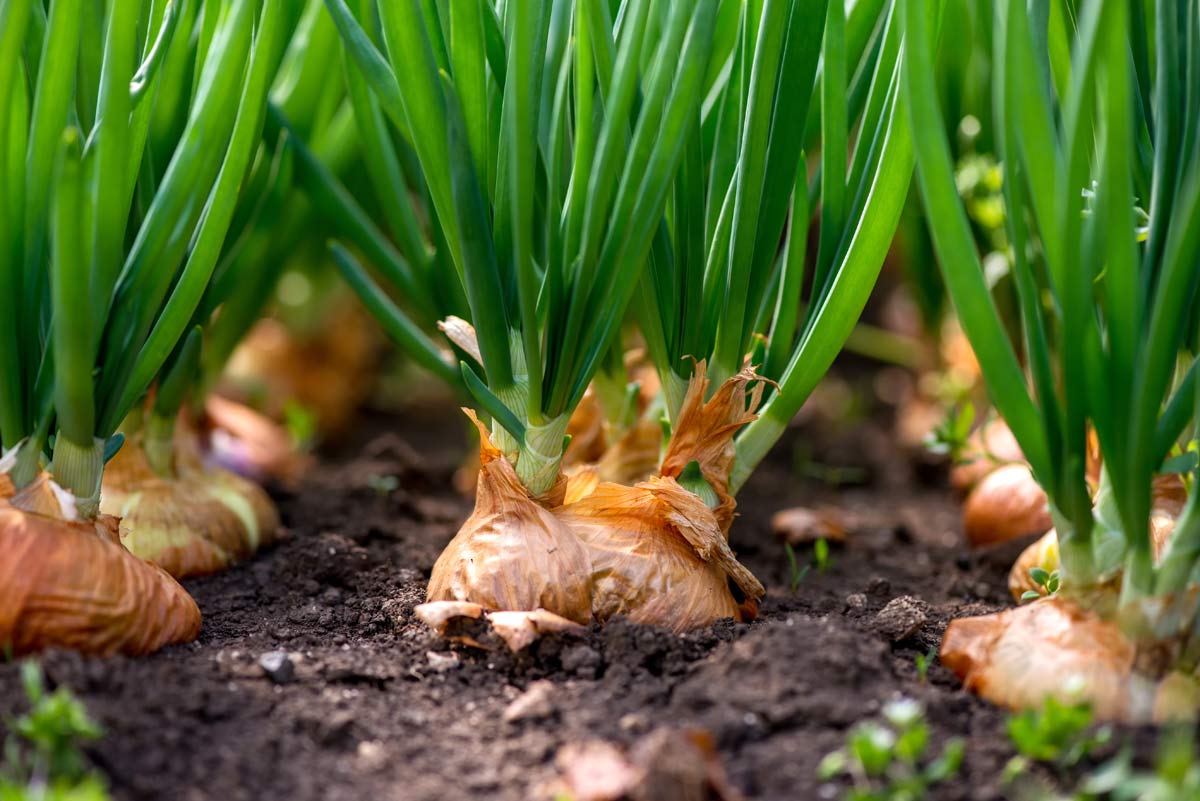 Like all root vegetables, much of onion growth is hidden below the soil surface.

This article will unearth the truth about these versatile bulbs, explaining the best growing conditions for onions, the onion life cycle, and the onion growing stages.

Plus, we’ll also debunk some myths about spring onions and scallions.

In the United States, onions grow year-round. California produces the most onions, over 25% of the nation’s total onion production. According to the USDA, the Golden State grew an estimated 1,902,600,000 pounds of onions in 2021.

Onions are a hardy vegetable. But seedlings should only go into the soil once temperatures consistently remain above 28° F.

This bulb vegetable has shallow root systems, making it easy to grow onions in both pots and the ground. However, onion seeds will produce smaller, stunted bulbs without adequate space between plants.

These shorter roots require well-drained soil that is rich in organic matter. Onions will not grow well (if at all) in clay soils, which drain slowly and can become waterlogged.

The best time to plant an onion crop will depend on a few factors: onion variety, regional growing season, available sunlight, and whether you’re growing the vegetable by seed or bulb.

Let’s look at the onion life cycle in a little more detail.

Life Cycle of an Onion

The onion is a biennial plant, meaning it has a two-year lifecycle.

If left to grow into a second season, the onion will begin the reproductive process. Bulb size reduces as the plant redirects reserved energy into sprouting and growing a flower.

This process is known as “going to seed” or “bolting”. Reaching this point of onion growth is only desirable for farmers who intend to harvest onions for the seeds rather than the bulbs.

Remember: the bulb is where the onion stores energy, so draining this reserve causes the bulb to shrivel.

Growing onions from seed reduces the risk of bolting. But it requires planning.

Before planting onion seeds in the ground, you will need to grow seedlings for six to eight weeks in a greenhouse.

Growing onions from tiny bulbs cuts the growing time in half. These bulbs, also known as onion sets, are onions harvested and stored during the previous year. Since these onions are in their second growing season, they are more likely to bolt.

It is also possible to grow onions from transplants. Onion transplants are juvenile onion bulbs, fresh from this year’s season. This youthfulness means they are less likely to bolt than onions grown from sets.

Onion transplants produce the biggest bulbs in the shortest amount of time with the least amount of work — making them a handy option for beginner gardeners.

Whichever growing method you choose, remember the vegetable’s one-to-one propagation. One bulb will produce one onion. Likewise, one onion will grow from one onion seed.

5 Growth Stages of the Common Onion

Germination is the process during which an onion seed develops into a plant.

When the seed’s embryo absorbs water, the cells inside the seed expand. This process, known as imbibition, increases the seed’s respiration and metabolic processes. The organelles in the embryo experience structural changes.

What does that look like to the naked eye?

Roots develop downward, anchoring into the soil. These roots hold the seed in place and absorb nutrients and moisture.

The lime green sprout develops upwards, pushing through the soil’s surface. Above the soil surface, this sprout allows the plant to perform photosynthesis. Photosynthesis produces food for the onion.

The seedling rapidly forms vegetative growth over two weeks, during which proper moisture, warmth, and fertilization are crucial.

During photosynthesis, the seedling converts sunlight into energy. The onion plant uses this energy to grow green vegetation.

These leaves look like smaller, fleshier versions of those found on a mature onion. Although still tiny, these ever-elongating leaves increase the plant’s ability to perform photosynthesis.

Once the seedling has produced several sets of mature leaves, the onion has successfully established in the soil.

After developing at least four robust leaves, the onion plant begins to direct energy toward bulb formation. Located at the point where the stem meets the root system, the bulb is the edible part of the common onion.

Vegetative growth and bulb formation occur simultaneously until the plant has produced eight to ten leaves.

At this point, vegetative growth stops. However, bulb formation continues for a period of weeks to months.

The plant transports food from the above-ground leaves to the scales below the surface. As they receive this energy, the scales swell. The scales eventually form rings around the bulb, providing a central storage tissue.

As the bulb matures, it eventually begins to emerge from the ground. Next, the above-ground leaves turn brown until this vegetation eventually droops toward the ground.

If grown from seed, onion maturation takes about four months. Growing onions from sets decreases this time to just under three months.

Determining when bulbs have reached full maturation depends on the regional growing season and the variety of onions you intend to harvest. (More on this topic in the next section.)

When harvested too early, onions will taste bitter. But harvesting onions too late increases the risk of rotting. It can be tricky to judge when an onion is ready to harvest, so pay attention to how the top leaves appear.

Brown, wilted top leaves and an exposed bulb indicate that the onion is ready for harvest.

Harvesting onions is fairly straightforward. Use a digging fork to loosen the soil around the onions, then carefully pull out the onions. Or use a shovel to dig out the onions.

After removing onions from the soil, you need to cure them for about 20 to 25 days. This process allows the onion to keep its shape.

To cure your harvest, hang onions in a dry place for four to six weeks. After curing, store the onions in a cool, dry place. They will last up to several months.

Remember, onions are a biennial plant. So if you don’t harvest them at the end of the first growing season, they will continue their growth cycle in the following spring.

Since the root systems have already been established, second-year onions will focus their energy on growing a flowery stalk for reproductive purposes. This process is known as bolting and causes onions to shrivel as the plant sends energy above ground.

If left to continue this end-of-life cycle, onion stalks will produce buds with a white or purple flower at the top of the plant.

Bees, butterflies, and birds pollinate these flower heads, which contain the onion’s seeds. Once seeds appear, the plant has completed its life cycle.

Spring onions are common onions that the grower has harvested early. Since they are the same species, the growing stages of spring onions and common are exactly the same.

Green onions, also known as scallions, are not the same species as common onions. Less than half an inch in diameter, the underdeveloped bulb looks more like a thick white stalk.