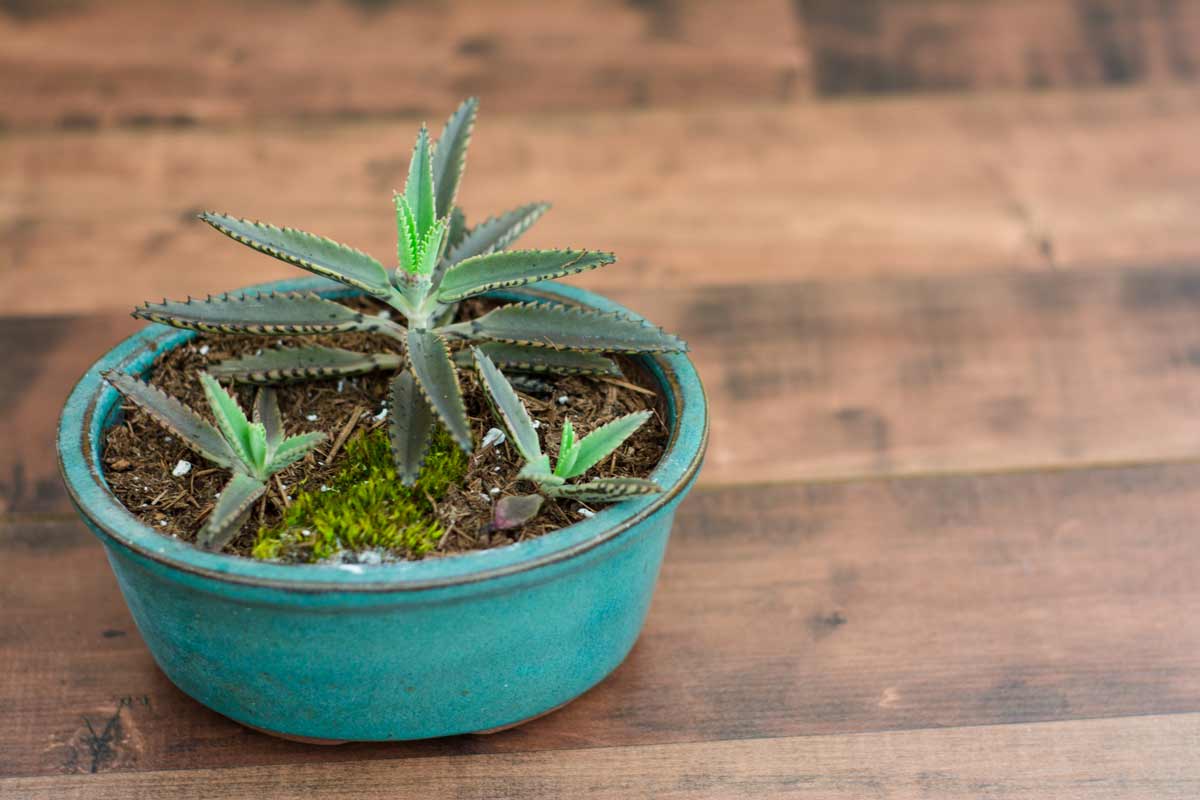 If you’re a plant lover who wants to add to your houseplant collection, Mother of Thousands will be a lovely addition. You can never go wrong with its attractive foliage and low-maintenance features. Native to Madagascar, the succulent plant thrives best outdoors in hot regions, and it seldom blooms indoors.

Want to know more about this plant? Here’s a guide on how to grow Mother of Thousands, from watering to soil and light.

First, let’s get a sneak peek at the physiology of the plant.

What is a Mother of Thousands Plant?

A distinct feature of this plant is the numerous tiny plantlets that grow along with the tips of the large leaves.

Little wonder it’s called Mother of Thousands since the slow-growing plant produces many leaves. Growing from the stem, the plant reaches a height of 3 ft. However, it stays smaller when grown as a houseplant.

During winter, Mother of Thousands plants blooms with small, pinkish-gray flowers that die after a while.

How to Grow Mother of Thousands Plant

Unlike some plants that grow from seeds, you can propagate Mother of Thousands from their plantlets. During winter, the plant undergoes dormancy, causing the plantlets to fall off. If they don’t fall off naturally, you can easily detach the plantlets from the main leaf.

Place plantlets on well-drained soil to initiate propagation. Allow access to sunlight for the healthy growth of plants.

As soon as the root system is formed, transplant plantlets to a potting medium to propagate a new plant.

Alternatively, You Can Propagate Mother of Thousands Through the Following Steps:

Irrespective of the plantlets, you can also propagate the succulent plant through stem cuttings. Late spring and early summer are the best time to take cuttings from Mother of Thousands, and these periods are the growing season for the plant.

Thus, the propagation will likely be successful.

Cut a long stem (should be about 2 inches or 5cm) with two leaves attached. Ensure the stem isn’t below an inch, as this can cause the plant to have difficulty standing erect.

Don’t use a flowering stem since this can alter your propagation process. Instead of growing, the stem will undergo reproduction. It’s advised to cut the stem from the top considerably after the first leaf node.

After cutting, place the stem in a dry area to stimulate callus formation on the cut ends. Allow it to stay till it dries well. Once dry, you can proceed to put the cuttings in a potting mix. Fill the pot with well-drained soil and gently compress.

Use a tool of your choice (chopsticks or rod) to bore holes in the soil to hold in the stem.

Typically, the holes should support and hold the cutting firmly to the soil. Water the plant till excess water drains out from the holes. After the water drains, move the potted plant to a bright place. For optimal results, the temperature of the area should be around 77°F.

As much as possible, don’t expose plants to direct sunlight, as this can affect propagation, causing harm to the plant.

Compared to plantlets, the cuttings will need some time, preferably two weeks, to develop; the root becomes fully developed after two months.

Caring for Mother of Thousands Plant

As earlier stated, Mother of Thousands is low maintenance; and it is a perfect choice for a novice. However, you still need to care for the succulent plant; here’s how:

Indirect light is best suited for the Mother of Thousands. Exposing the plant to direct sunlight can lead to leaf scorch. Let your potted plant face eastward or southward to receive bright light which isn’t scorching.

Furthermore, to prevent leaf burning, you should expose your plant to the morning sun since it’s bright and not scorching.

A plant that doesn’t get enough sunlight will not likely bloom, have large spaces between leaves, and become spindly.

As a drought-tolerant plant, Mother of Thousands needs to be hydrated often, especially when it’s in the growing stage.

For plants kept indoors, you should water them occasionally when the soil has lost moisture.

Considering the humidity level in your home, you may need to water the Mother of Thousands fortnightly. Reduce watering during winter and spring. In addition, ensure the plant isn’t dry before watering it.

Avoid over watering the plant as it can become waterlogged, leading to root rot and death of the plant. Also, only water the soil, not the leaves; watering them can make them limp and rot.

Mother of Thousands does not require regular fertilizer for growth. Depending on the soil condition or plant, you can apply fertilizer once a month or once in three months, and you should do this in its growing stage. Use diluted liquid fertilizer or an option suitable for succulents.

Mother of Thousands thrives best in average to warm temperatures ranging from 65°F to 75°F (16°C – 24°C). Ensure you don’t expose the plant to extreme temperatures. This can damage the foliage.

You can keep Mother of Thousands outdoors in the summer. However, you’ll need to move it indoors in early autumn or winter as it can’t withstand freezing temperatures.

Well-drained sandy soil or cactus soil seems like the best soil for growing Mother of Thousands. While many house plant enthusiasts prefer a cactus mix, others opt for a soil mix (a combination of perlite and sand). You can also add pumice and vermiculite to sandy soil.

You can add pebbles to your pot for decorative purposes, and these pebbles support drainage and circulation of air in the soil.

Mother of Thousands stores moisture in its leaves as a succulent, making it adaptable to dry conditions. Since the plant absorbs moisture, you may not have to mist the leaves or increase the humidity of your room.

For plants with tops above large leaves, ensure you trim them so leaves can grow at the same pace. While pruning, plantlets may fall, which can quickly take root if not disposed of immediately.

Though Mother of Thousands is low maintenance, it’s susceptible to pest attacks. Mealybugs, aphids, and scale insects are sucking pests that can cause damage to your houseplant.

Typically, these pests get attached to the leaves and suck the thick, juicy sap. To get rid of these, spritz Mother of Thousands with neem oil. You can also introduce insects like ladybugs and lacewings to plants to help eliminate the pests.

Typically, you’ll need to re-pot if plantlets that fell have begun to sprout in the pot housing the mother plant. Transfer the plantlets into another container to allow succulents to grow well. How can you tell when to repot your houseplant?

Here are signs to look out for when it’s time for repotting:

It’s best to repot in spring. The spring marks the growing season where the plant obtains sunlight and warmth to thrive.

Like every succulent, Mother of Thousands needs to be well aerated. Thus, a terracotta pot with drainage holes will be suitable for growing the plant, and excess water drains out through these holes.

While a terracotta pot may seem like the best option, you can also use plastic and ceramic containers.

When choosing a pot, ensure it’s slightly larger than the plant’s root bed. Furthermore, place a saucer or tray under the pot to collect excess water. Empty the saucer regularly to prevent water from accumulating.

Allowing Mother of Thousands to stand in a wet environment can cause root rot and fungal infections. In addition, the growth rate of the houseplant depends on the size of the container.

Plant enthusiasts who keep various houseplants are advised not to plant Mother of Thousands with other plants due to the sprouty nature of the plantlets.

Popular for their beautiful foliage, not many know that Mother of Thousands produce flowers. When grown indoors, the succulent rarely blooms.

However, it flowers when grown outside under the right conditions. These flowers are petite and bell-like, forming clusters on the stem, and they mostly bloom in late fall and early winter.

Every part of the Mother of Thousands is poisonous, including the leaves, stems, and plantlets. Be careful that kids and pets don’t nibble on this plant as it’s harmful to health. Ensure the plant is out of their reach.

Prune dead and damaged leaves, as it will give room for new leaves to grow. For overly tall trees, prune the stems; you can repot these pruned stems to grow a new plant.

Avoid exposing Mother of Thousands to air heating ducts. This can alter the normal functioning and physiology of the plant. Furthermore, these heating ducts can lead to the premature falling of plantlets.

Now you understand how to propagate Mother of Thousands, the repotting process, choosing the right pot, and caring for the succulent.

How about the species? There are various species to select from, including Bryophyllum delagoense, Bryophyllum fedtschenkoi, Bryophyllum pinnatum, etc. Whichever species you choose, Mother of Thousands will add color to your home.

Mother of Thousands makes gardening a worthwhile experience. It’s easy to maintain and has beautiful vegetation that adds to the aesthetics of your home.

Avoid overwatering and exposing it to direct sunlight. With favorable growing conditions, the Mother of Thousands will thrive anywhere.

Plantlets are what grows on the outer edges of mother of thousands leaves.

Why is my mother of thousands not producing plantlets?

Either not enough light or you could be over-watering your plant.

How Long Does It Take To Propagate Succulents?

How Big Do Succulents Get? (Explained + Tips)