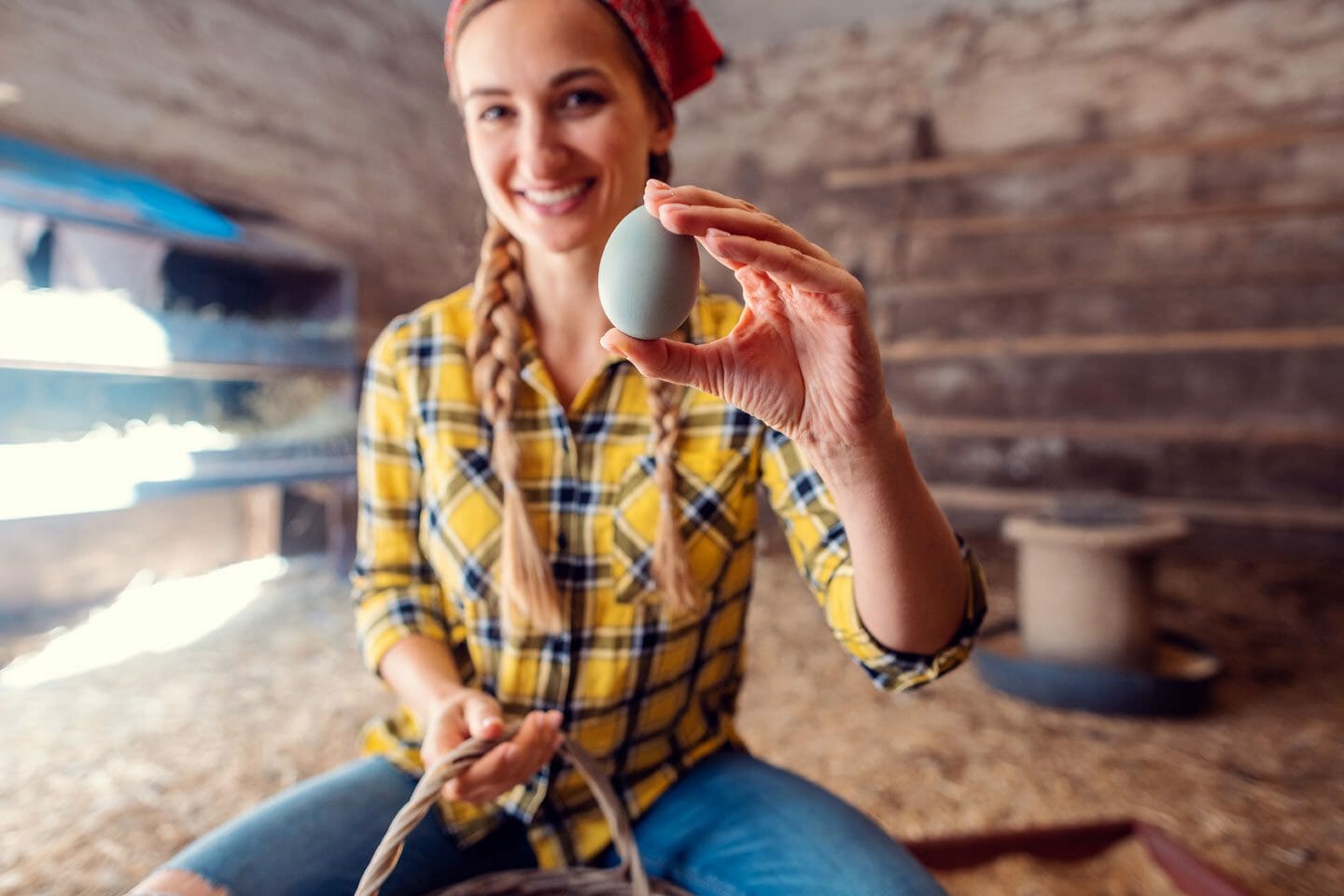 Eggs are a marvelous source of protein and nutrition for people around the world. Raising chickens in the backyard appeals to many who want to know where their food comes from and take pride in self-sufficiency. But does it make financial sense? The answer is a qualified yes, but the cost of keeping chickens can skyrocket depending how it’s done — and it matters what kind of eggs you would otherwise buy.

As of March 2018, the average price of a dozen large grade A eggs from a grocery store in a U.S. metropolitan area was $1.83, according to the Bureau of Labor Statistics, or just under $100 a year if you buy them every week. But organic, free-range eggs command a premium. If you spend $7 weekly for a dozen farmers market eggs, then yes, raising chickens probably will save you money, says Sarah Cook, founder of Sustainable Cooks. “If you stock up when eggs are 99 cents at the store, then your backyard flock will never be able to match the price of factory-farmed eggs.”

Cook estimates that it costs her $3.50 per dozen eggs to feed and care for her admittedly “spoiled” chickens. “Considering free-range, organic eggs at most stores start at $4 a dozen, I am saving a tiny bit,” she says. Adding in costs and responsibilities such as building housing and keeping the birds safe can change the math. “Where you live also impacts the cost,” Cook says. “Here in Seattle, our chickens slow down their laying from November until March due to fewer hours of daylight. You can get around this by putting a light in the coop, but that can also lead to stressed-out birds.”

The price of the birds should be less than $4 each at a feed store, Cook says, although fancier breeds can cost up to $20 per hen. Plan to buy a minimum of four chicks — chickens are social animals and need to huddle for warmth early on. Also, look for “sexed chicks,” so you know you’re getting all females. “‘Straight-run’ chicks are luck of the draw, and you could end up with some roosters in the mix,” Cook says. 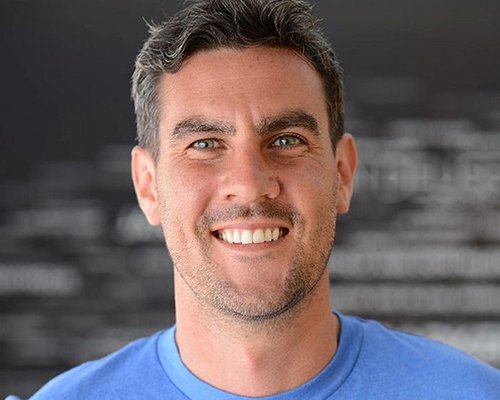 People for the Ethical Treatment of Animals has held chicken adoption events for birds rescued from egg farms that are “depopulating.” They are placed with preapproved guardians who pay a small fee and become “as beloved as any dog or cat,” says Ben Williamson, a media director at PETA.

Although the animal rights group suggests giving up eggs altogether, “we would not oppose eating eggs from chickens treated as companions, if the birds receive excellent care and are not purchased from hatcheries,” which have a reputation for inbreeding and cruel treatment, Williamson says. “Make sure you’re ready for the commitment of adopting chickens, as they will continue to be a part of your family long after they stop producing eggs.”

Experts generally recommend buying chicks and raising them to maturity rather than buying adult chickens. In the four to five weeks from hatching to the coop, chicks need a deep container with smooth walls, bedding, a heat lamp, and nutrient-rich food that’s more expensive than chicken feed. That initial setup can run $50 to $100, Cook says, but much of it is a one-time cost. Time is the bigger expenditure: Chicks have to be watched.

“All chickens are pretty dim, but baby chicks are especially dumb,” Cook says. “They constantly need fresh water, as they’ll kick shavings and even poop in their water.” And that’s not to mention the biggest threat to the birds’ well-being in the first month: other chicks. “Chickens are relentless bullies,” Cook says. “The term ‘pecking order’ makes total sense when you watch a flock of chickens.”

Once the chicks are grown, they “require less upkeep than dogs or cats,” says Maat van Uitert, founder of Pampered Chicken Mama. “You can keep them as simply as you want, and allow them to forage for their food.”

The local farm store might sell elaborate chicken coops that cost hundreds of dollars, but a simple coop can be made from salvaged materials. It just needs to keep predators away — which includes a roof to guard against hawks — and be well-ventilated.

Although chickens tend to love company, van Uitert suggests keeping the flock at one or two chickens for each family member eating the eggs, to control costs and avoid overcrowding the coop. “Once you get two or three chickens, it’s so easy to slip and get 10 or even 20,” she says. “Some people are able to offset costs by selling eggs. However … most people don’t make anything.”

Restless chickens can be destructive and mean, though, especially as they get older, so Cook advises allowing them plenty of room to roam and keeping them occupied with things like straw, shavings, and fall leaves for scratching. Another trick: Hang a head of iceberg lettuce from a string in the coop — a plaything often called a “flock blocker” — and they’ll peck at it like a piñata. 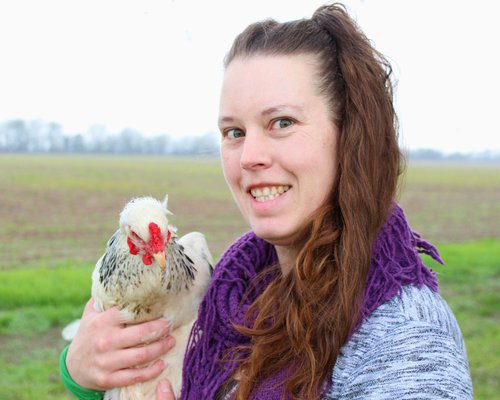 Letting chickens forage for their food may be economical, and naturally groom the landscape as the flock roams free, but their diet dictates the quality of the eggs. Variety is the key to healthy chickens and tasty eggs, Cook says. “Most chickens adore greens, leftover rice, yogurt, vegetable scraps, garden scraps, grass, and weeds.” Human food should be given mainly as a treat — “and avoid dairy, sugar, meat, fats, and citrus,” she says.

That leaves feed as chickens’ primary source of nutrition. While chicks under 12 weeks should have feed and water available 24 hours a day, adult chickens can be fed once or twice daily, typically in the morning and afternoon, before they go to bed for the evening.

Van Uitert estimates that chicken feed for a flock of five should cost a few dollars a month. She saves money by buying in bulk directly from a local grain manufacturer, which charges about $5 for the amount in a $30 bag from the feed store. Look for food high in protein and calcium (ground-up eggshells from your own flock also add calcium). Feeding chickens a high-quality, organic diet may turn out to be more expensive than buying conventional eggs at the grocery store, “but you’ll be sure the food you eat is healthy,” van Uitert says.

So, the Chicken or the Eggs?

Owning a small flock can pay off if you take steps to keep costs down along the way — and keep the birds safe from predators. “Nothing is more expensive than having to start your flock all over again,” Cook says, not to mention the heartache of losing the animals after becoming attached to them. Once they mature, the cluckers are full of curiosity and personality and cotton to humans, making them fun, low-maintenance pets. Raising chickens may be particularly worthwhile for gardeners, who can feed them garden scraps and then use the chickens’ waste for compost, in addition to eating the eggs.

Bottom line, Cook says: Most backyard chicken farmers “do it for the love, the fresh eggs, the birds, the compost, and the entertainment, rather than the economics of it.”

Feathers of Gold: The World's Most Expensive Chicken Breed
A-Z List of Black Chicken Breeds: 18 Types (With Pictures)
Great Chicken & Waffle Joints in Every State
The 20 Best Chicken Breeds For Beginners
Share on TwitterShare on FacebookShare on PinterestShare on LinkedIn