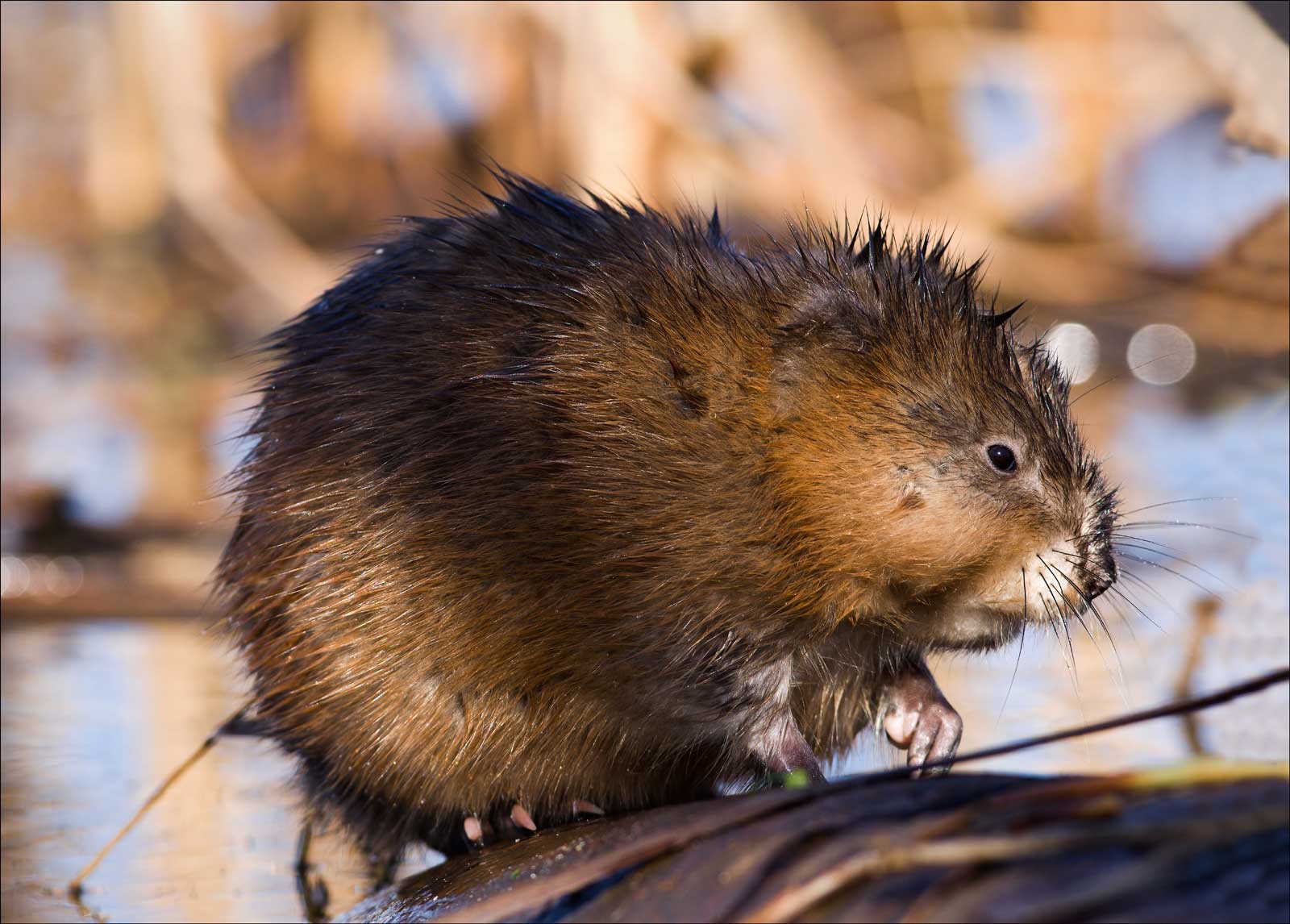 Muskrats are a species of semi-aquatic rodents found in marshes, swamps, and other wetlands around the world. They look similar to beavers but are smaller, with a long, skinny tail that’s flat on the side and lack orange incisors.

Like beavers, muskrats are considered ecosystem engineers. In the wild, they help create openings in the vegetation that provide nesting grounds for waterfowl. However, if their population is not kept in check by predators, or if they find their way into urban areas, they can cause significant damage.

This article will teach you how to get rid of muskrats in your pond or garden, what methods to use, and will discuss why keeping the muskrat population under control is beneficial for your pond, as well as the environment.

Contents show
1 Where Do Muskrats Live?
2 What Attracts Muskrats
3 Wondering if Muskrats Are Bad for Ponds?
3.1 How to Tell if You Have Muskrats in Your Pond
4 Are Muskrats Dangerous?
5 How To Get Rid of Muskrats Naturally
5.1 Use Pond Liners
5.2 Install Floating Pond Netting
5.3 Install a Fence
5.4 Limit Their Food Source
6 Use a Muskrat Repellent
7 Modify Their Habitat
8 Use Muskrat Traps
9 Videos
10 Final Thoughts
11 References

Where Do Muskrats Live?

Muskrats have naturalized in many parts of the world and are native to North America. They are commonly found in wetlands, ranging from swamps and marshes to rivers and lakes. Although it’s rare, you can also find muskrats living in or next to ornamental ponds.

These semi-aquatic rodents live in burrows dug in waterside banks. The entrance to a muskrat den is typically located about 6 inches below the water level, and it then extends into a tunnel that can be up to 45 feet long.

In some cases, muskrats also build dome-like structures along the waterways. Muskrats are primarily nocturnal, but they can also be active at dawn or early evening in spring.

Muskrats are currently listed as invasive in Europe, but they also pose an environmental threat in countries such as Canada, the United States, and parts of Asia and South America.

Muskrats are attracted to two things: a reliable food source and a safe place for their den. So if you live by a lake, a swamp, a canal, or a river, or if you have a pond in your backyard, you can expect muskrats to find their way into your garden.

Muskrats are predominantly herbivores. Their favorite food is cattail and other aquatic vegetation such as water lilies, rushes, sedges, arrowheads, ferns, and horsetail.

If they can’t find enough food in ponds and lakes, they will wander into your garden to snack on apples and root vegetables such as turnips, carrots, and beets. Muskrats will also eat small animals such as frogs, fish, small turtles, clams, and crayfish.

Wondering if Muskrats Are Bad for Ponds?

Yes. Muskrats can cause severe damage to ornamental ponds and lakes by burrowing into the banks to build their dens.

This can cause bank erosion, seepage, and bank collapse. They will also eat the plants growing around the pond and even small animals such as koi fish.

How to Tell if You Have Muskrats in Your Pond

The most common signs that you have muskrats in your pond or garden are:

Muskrats are afraid of people and don’t typically attack you unless they’re threatened or captured. However, they can be particularly aggressive when they have baby muskrats (or kits) in the den. Muskrats carry several diseases, such as leptospirosis (Weil’s disease) and parasites such as Cryptosporidium and tapeworms.

The worst disease carried by muskrats is rabies, which needs immediate treatment after a bite or scratch. Unfortunately, rabies has no cure; if left untreated, it will be fatal once it reaches the brain.

Muskrats can also harm the environment, especially if their population gets out of control. Unlike beavers, they do not cut down trees, but their grazing can strip entire areas of vegetation, limiting food availability for native species.

Besides damaging river and lake banks, burrowing can lead to groundwater contamination and soil aeration. This then leads to excessive algae growth resulting from eutrophication, reducing biodiversity and even impacting human health.

How To Get Rid of Muskrats Naturally

There are several methods you can use to get rid of muskrats. Each has varying degrees of effectiveness; some come with a few caveats to keep in mind.

If you have a small pond in your garden, using a plastic liner is a great way to prevent muskrats from digging and burrowing inside the shoreline.

The downside to using plastic pond liners is that they can limit the type of aquatic vegetation you can grow. Also, they’re not an esthetically pleasing solution. Alternatively, you can swap them with chicken wire held in place with hooks and decorative boulders.

Note: Muskrats can damage EPDM rubber pond liner causing leaks. So, it may be wise to use chicken wire, or metal hardware cloth on top of the rubber liner for protection.

Pond netting is commonly used to protect fish from cats and herons but can have good results against muskrats.

The netting will keep the muskrats out of your pond but won’t get in the way of insects and small amphibians such as frogs and newts. Use a few sturdy hooks to secure it to the banks and some decorative rocks and driftwood to hide the edges.

Pond netting is an excellent solution if you have a small pond or lake in place for a long time and can’t afford to drain and empty it to use a pond liner. And, since most netting is black, it won’t be easy to see once it’s in place.

The downside is that if you have a thriving population of muskrats in your garden, they will simply chew through the pond netting.

A fence is often enough to prevent muskrats from entering your yard. Fencing can also protect your garden, especially your vegetables and flower beds.

When installing a fence, ensure it reaches at least 1 foot below the ground or 3 feet if it’s surrounding a lake or pond. Otherwise, muskrats will simply dig under it.

Muskrats’ favorite food is cattail, an aquatic plant known as bulrush or reedmace. Removing this plant from the side of your pond or lake will reduce food availability and discourage muskrats from settling in your garden.

However, limiting food availability is a two-edged sword.

On the one hand, it can be used to drive muskrats out of your pond or lake. But hungry muskrats will simply look for food elsewhere, and you may find them eating other ornamental plants and vegetables in your garden instead.

Also, cattails play a vital role in any aquatic ecosystem. They provide shelter for insects, frogs, and wild birds, such as geese, migratory ducks, and red-winged blackbirds.

Cattails also protect lake shores from wind and water erosion. Removing them may reduce the muskrat population, but other species will also suffer.

Use a Muskrat Repellent

Muskrats hate certain scents, which can be used as a deterrent. The smells muskrats hate the most include:

You can make your own muskrat repellent spray by combining garlic powder and Cayenne pepper with water. Peppermint oil also works.

These substances have an unpleasant smell and taste, and spraying them on the plants around your pond can discourage muskrats from eating them.

Another repellent you can try is fox or coyote urine. Predator urine sprays are easy to find online and work best when sprayed around your pond in early spring. Essentially, this tells muskrats that predators are around and that they should find a new den for their young.

Muskrats are also afraid of humans.

Try leaving an old piece of clothing or shoes next to the pond or waterway. If you have pets, such as cats or dogs, the smell of an old pet blanket or toy can also be used to warn muskrats that the area is not safe.

The downside to using muskrat repellent sprays — whether homemade or store-bought — is that they fade quickly and need regular applications.

Also, repellants don’t always work. On the other hand, muskrats are intelligent and resilient. If they’re hungry, no amount of peppermint oil or fox urine is going to keep them away from your pond.

According to the USDA’s Animal and Plant Health Inspection Service, no registered muskrat repellents are effective, practical, and environmentally safe.

Changing the muskrats’ habitat is an effective solution for dealing with a large population. For best results, use this method in the fall.

Muskrats don’t store food for winter, and although they don’t hibernate, they will spend long periods in their den if winter is frigid.

Start by draining the water from your pond or small lake by 2 feet. This will expose the underwater entrance into the muskrat den, which should be around 5 or 6 inches wide.

You can then use rubble or riprap to fill the den and create a barrier preventing the muskrats from digging a new burrow.

If you can, try draining your pond entirely over winter. To make the method even more effective, cut back all the vegetation surrounding the pond, and spray a repellent such as fox or coyote urine along the banks.

Modifying muskrat habitat limits food availability and tells muskrats that their den is at risk from potential predators. On the plus side, this will cause them to move elsewhere.

However, they will only become someone else’s problem, and you may find muskrats returning to your pond when your neighbors use the same methods to get rid of them.

Remember that any drastic changes to the habitat will impact more than just muskrats, especially if you’ve had a pond for several years. Frogs, insects, turtles, small birds, and other wildlife will lose their shelter and food source and may leave your garden.

Trapping is the most common method to control and get rid of muskrats. You can use humane traps or, for best results, hire a professional to handle the job.

It may not be the most ethical solution, but sadly, it’s the best way to control large and well-established populations of muskrats.

Always talk to your local wildlife management center first if you plan to bait and trap muskrats yourself. Removing muskrats from your yard and releasing them in the wild can severely impact the environment, especially if there are no predators in the area to control the muskrat population.

The following video will show you how to make your own muskrat trap using galvanized mesh wire. One colony trap can catch multiple muskrats.

In their native habitat, muskrats play an essential role in the ecosystem. But without predators to keep them in check, they can quickly become a problem, especially in urban areas.

Trapping is the most effective way to get rid of muskrats. But, a combination of several methods is recommended for a more humane approach. By using pond liners, pond netting, and fences, regularly applying a predatory urine spray, and limiting food availability, you can get rid of muskrats from your garden without killing them.