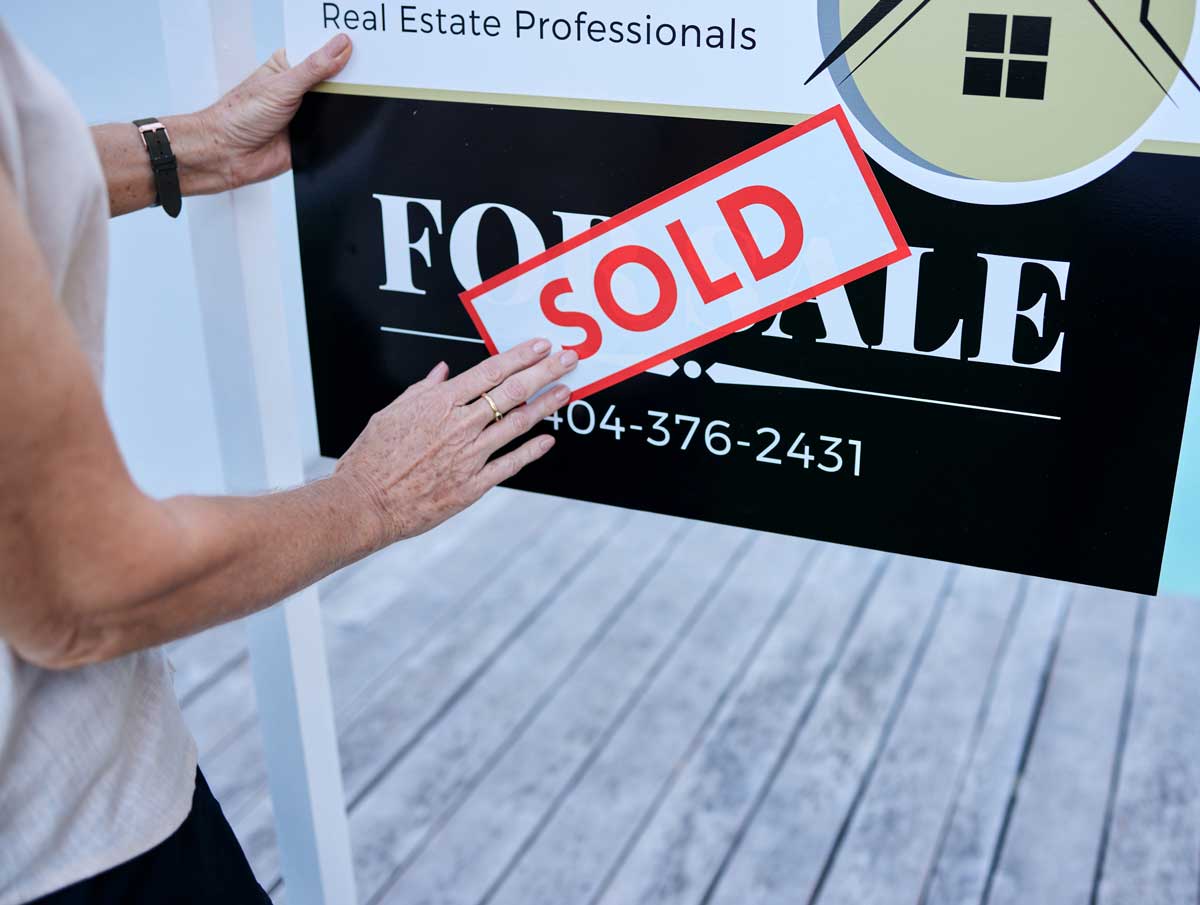 Unless you plan on purchasing real estate with an all-cash offer, you’ll likely be taking out a mortgage loan. It’s never a bad idea to be aware of mortgage rates, which can be ever-changing due to various factors—inflation, economic growth, Federal Reserve policies, the bond market, and relevant housing market conditions, among them.

A fixed-rate mortgage is a home loan that has a set interest rate for the entire lifetime of the loan. Typically, you’ll see 30- or 15-year fixed mortgage loans; the former mortgages are the most common type with about 90% of homebuyers using one in their home purchase. 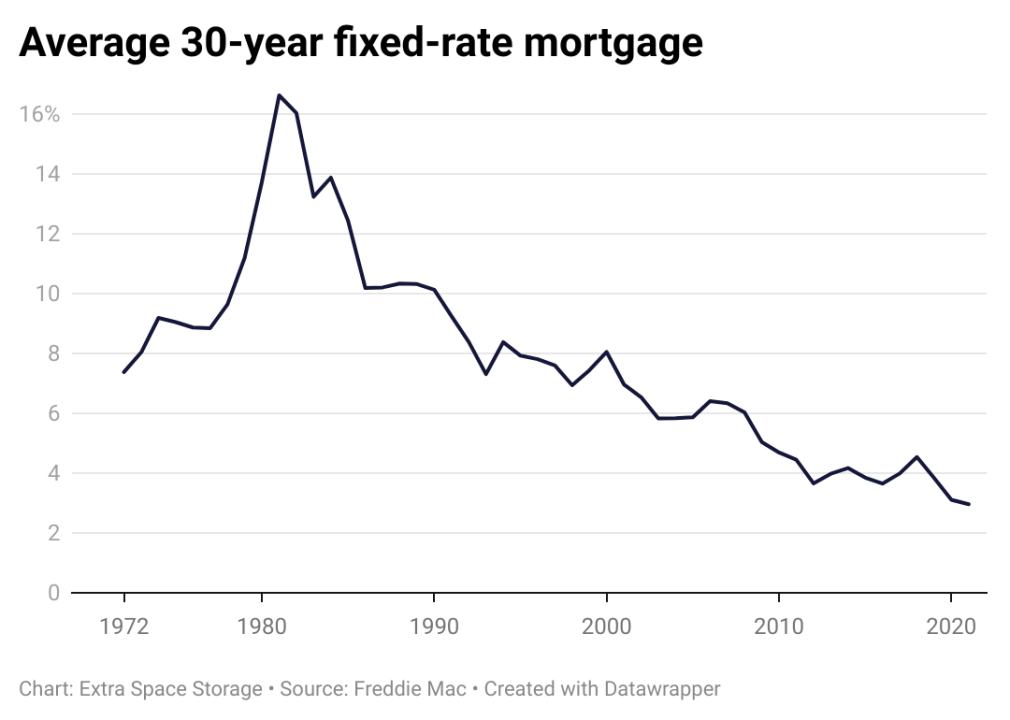 For the first time in over a decade, mortgage rates have increased. In April 2022, 30-year fixed mortgage rates rose above 5%. After dropping to historic lows during the height of the COVID-19 lockdowns—when the rate hovered at 3.2%—this upward trajectory has dampened many would-be buyers’ enthusiasm.

However, mortgage rates are now relatively low in comparison to the historical average of around 8%. The early 1980s set records for the highest mortgage rates, jumping above a staggering 16%. 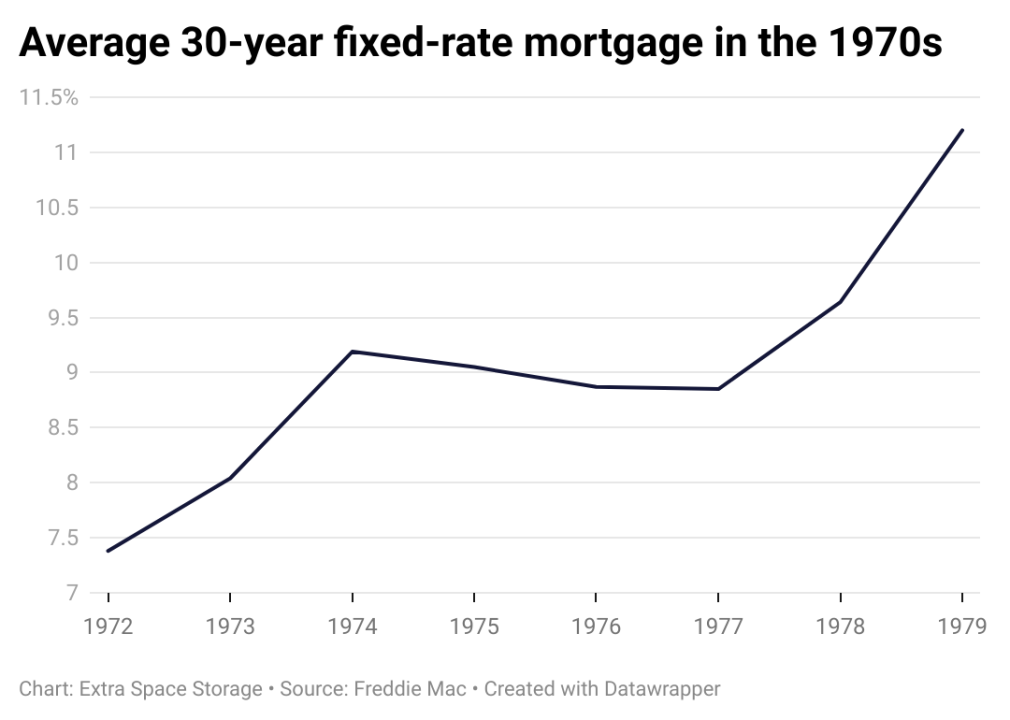 During the 1970s, the Great Inflation was to blame for rising mortgage rates. Among the contributing factors included Keynesian economic policy, central bank policy, market psychology, and the abandonment of the gold window during the Nixon administration, when it was decided the U.S. government would no longer redeem dollars for gold from foreign banks. This decade led to some of the highest inflation rates seen in U.S. history.

The stock market spiraled into a bear market, losing half of its valuation over a 20-month timeframe. Economic growth stalled into stagflation, which combines high inflation with spiking unemployment rates, causing a sharp decline in U.S. industries like automaking. 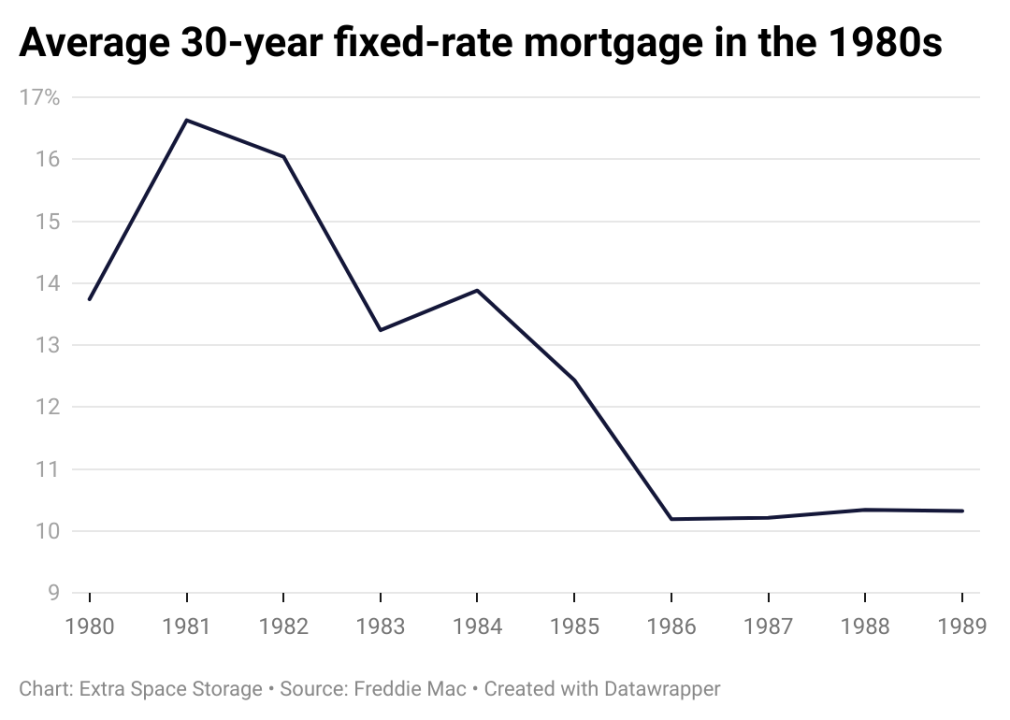 An oil embargo following the Arab-Israeli War of 1973 worsened the inflation of the ’70s, pushing the U.S. into a recession. Prices of goods and services grew rapidly, which was an effect of severe inflation.

The Federal Reserve raised interest rates in an attempt to combat the effects of this hyperinflation; this caused the cost of borrowing money to remain higher. 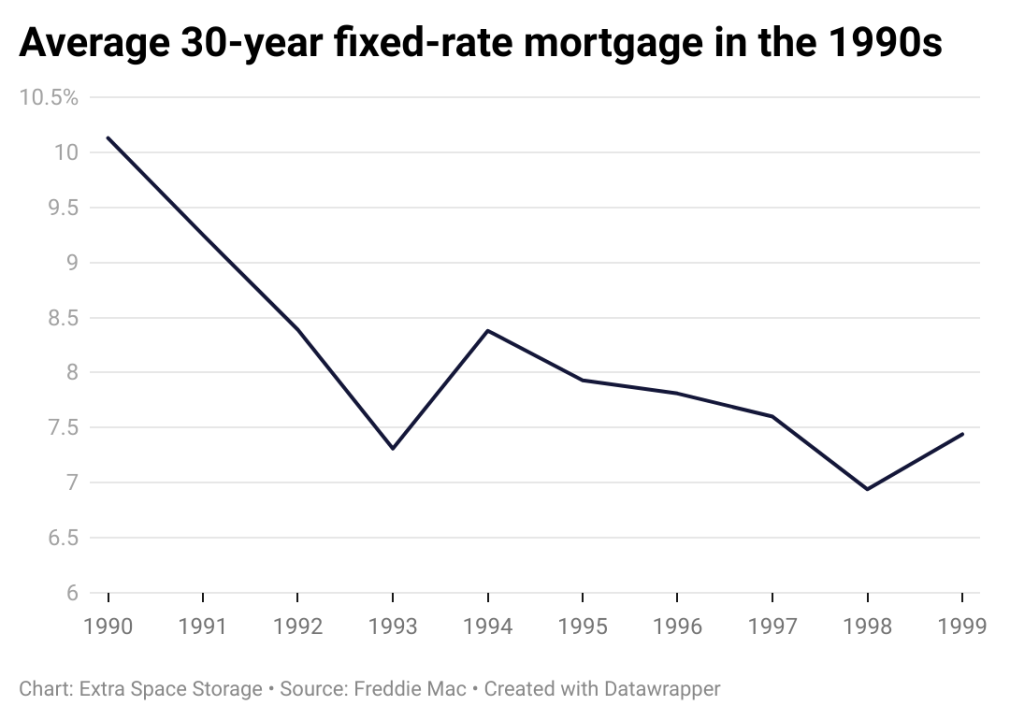 In comparison to the previous two decades, the 1990s allowed for a great moderation in interest rates accompanied by growth, as the baby boomers entered their peak earning years.

Inflation declined from over 10% in 1990 to below 7% in 1998—incidentally the last year the federal government enjoyed a budget surplus. In the latter half of the 1990s, information technology and the nascent internet drove productivity growth. Investments were made in newer technologies, such as laptop computers and cellphones.

With the advent of the internet came increased e-commerce through future behemoths like Amazon, as well as the first telecommuters. 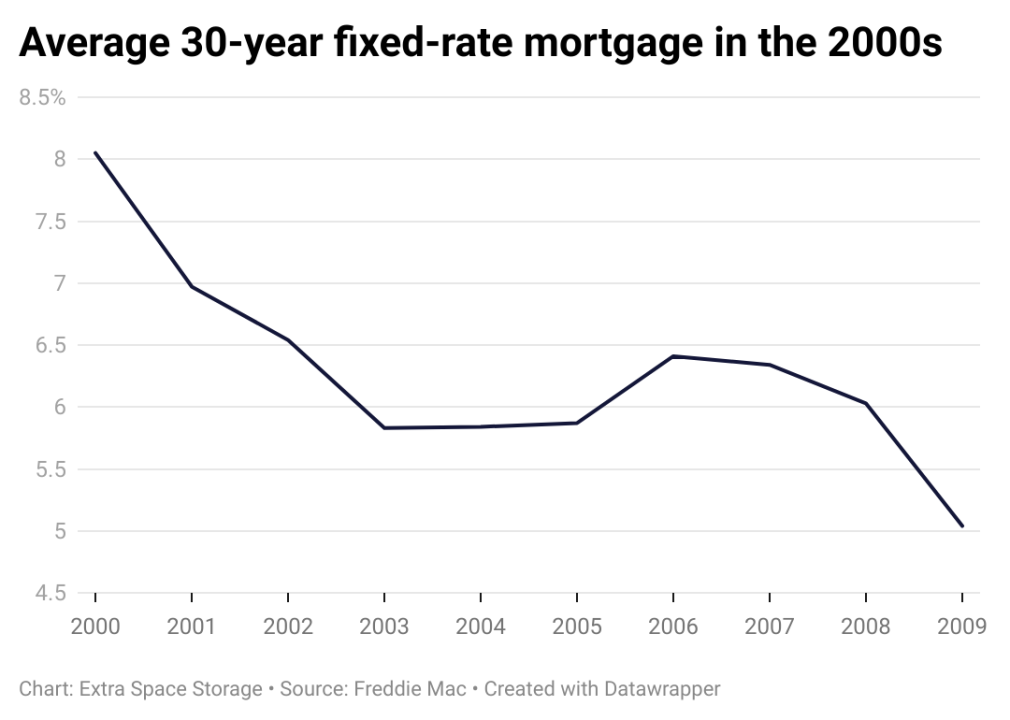 Thirty-year fixed mortgage rates showed a continual decrease during the 2000s, going from above 10% to the 5% range in just the first three years. Despite this, the 2000s faced its fair share of economic challenges.

The 2003 invasion of Iraq drove up the price of oil. The rise of India, China, and other Asian economies raised energy prices and boosted industrial metals to 2008 highs. The Great Recession that followed extended from 2007 to 2009 and is known historically as the most severe downturn since the Great Depression of the 1930s.

The unprecedented fiscal, monetary, and regulatory stimulus was implemented first by the administration of George Bush and then Barack Obama. This occurred after the 2000s housing bubble led to the subprime crisis of 2007, when many borrowers could no longer service their mortgages. 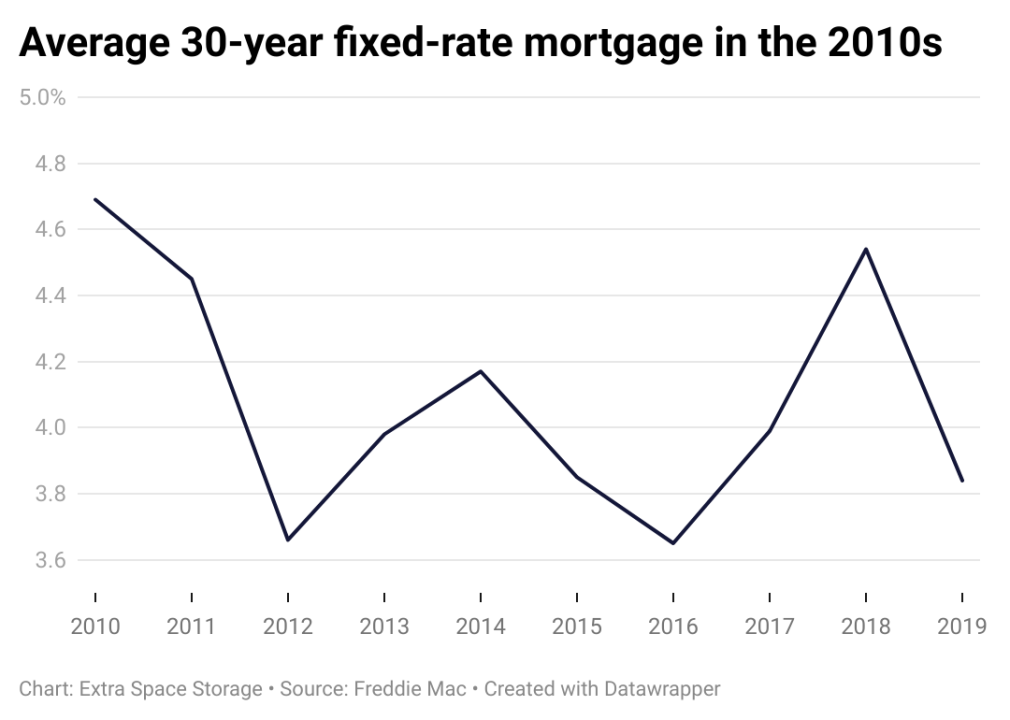 2010 marked a slow recovery, following the Great Recession. Over the last decade, there have been ups and downs, but nothing has rattled the economy like the 2020 coronavirus pandemic.

According to Forbes, by boosting remote work, COVID-19 has changed the housing market forever—and the Fed responded by resetting interest rates. The 2021 average 30-year fixed mortgage rate drastically fell to 2.96%, the lowest on record.

This story originally appeared on Extra Space Storage and was produced and distributed in partnership with Stacker Studio. Written by: Chandler Franks.