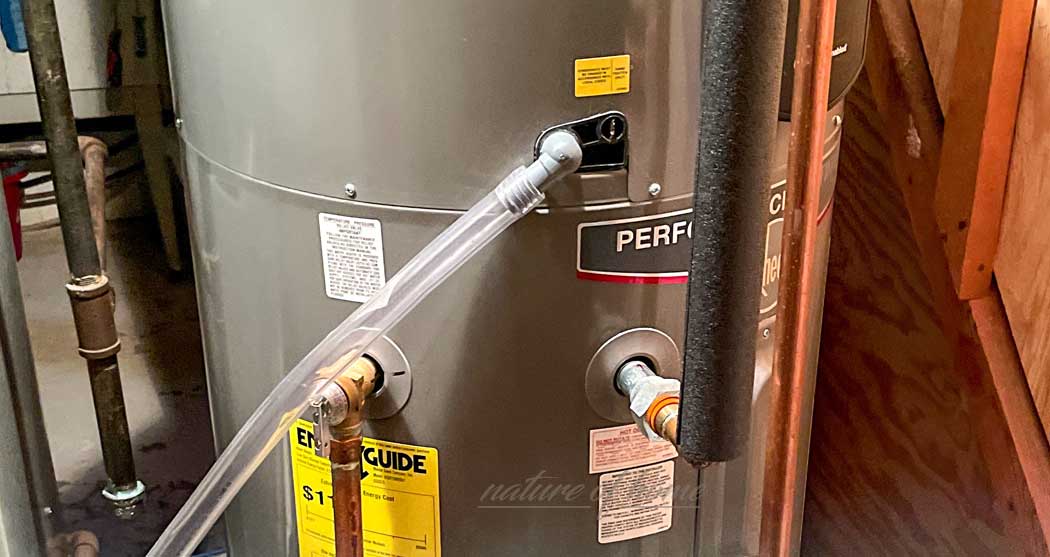 If you’ve recently replaced your water heater, and now your water smells like sulfur, this is the article for you. We replaced a gas hot water heater in 2019 with a Rheem electric hybrid heat pump water heater.  About a week after installation, there started to be a “rotten egg” smell.

The smell was only in hot water and became worse as time went on.  Something had to be done.

After doing some research, it turns out to be hydrogen sulfide gas (H2S) and pretty standard in homes with well water.

The amount of H2S typically found in homes is usually not a large enough amount to cause health issues.  Mainly just an annoyance.

Natural gas hot water heaters can also smell like sulfur, so it’s not the type of water heater.  It is the anode rod along with bacteria in the tank.

To understand how to get rid of the hot water heater rotten egg smell, we need to figure out what exactly is happening inside the tank.

Many of the hot water heaters on the market today are engineered with a tank lined with steel that has a layer of glass. Tiny cracks develop in the glass lining over time that exposes the steel to water.

The steel tank will corrode inside, creating oxidation and eventually leaking.

Hopefully, you have a basin to catch the water and direct it to a drain.  There have been many cases of a hot water heater failing and water spreading over a basement floor.

So the goal is to stop the steel tank from oxidizing.  Then it will not fail and leak all over the place.

Water heaters have been designed to prevent this by using a sacrificial anode rod.  The anode rods work by giving up their electrons more quickly than the steel tank.  Called “active metal,” that is usually magnesium.  A rod is cast with magnesium around a steel core and then combined with a threaded bushing, which is what screws onto the hole in the top of the tank (often too torqued too tight from the factory).

The anodes steel core, magnesium, and water will form a complete circuit.  Through which a minimal amount of current will flow. The metals behave like battery electrodes and dissolve minerals in the water, which act as electrolytes.

Over time the anode rod will erode as the magnesium supplies electrons to the iron and dissolve.  As long as the rod takes on the corrosion, the tank is spared and extends its life.

When anode rods are new, they provide an adequate amount of electrons.  But, over time, the rod itself starts to shrink, along with the electrons it supplies.

Once the rod gets to about 50% of its original size, it doesn’t provide 100% protection against corrosion resistance.  And should be replaced.

Most regular hot water heaters should have their anode rod replaced every 3-5 years. Since once the tank rusts and leaks, there is no way to fix it.  You must replace the entire water heater.

Manufacturers have realized that most homeowners don’t replace their anode rod on time. They are allowing the water heaters to fail earlier than they should. So, manufacturers have been designing new water heaters with multiple anode rods or rods with more material on them.  This prolongs the life of the rod and tank. It allows them to offer more extended warranty periods.

Some water heater manufacturers will even give you a second anode rod and the time recommended to install it. They were acting as a “warranty extension.”

The reactions in tanks with the sacrificial anode may stimulate the development of a particular group of microorganisms called Sulfate-reducing bacteria (SRBs). SRBs eat the sulfate (SO4), a mineral found naturally in groundwater, and transform it into H2S. They’re ancient creatures that have been around since Earth’s atmosphere was devoid of oxygen.

Since the SRBs “breathe” SO4 instead of oxygen (O2), they can thrive in anaerobic environments such as swamp muck and deep-sea sediments.

SRBs are prevalent in all water bodies and are safe in low amounts. When their populations increase and the production of H2S rises, they begin to become a concern. To be successful, SRBs require sulfate as well as an energy source. They obtain energy through the breakdown of organic matter that is decaying. Water heaters are similar to water tanks. The movement of electrons through the anode provides the energy needed to boost their growth.

The function of the anode as a source of energy for SRBs can explain why sulfur smells often appear after the water heater has been replaced. The anode has been mostly or entirely dissolved when a tank is old.

The new tank’s anode is intact and will encourage vigorous growth.

What is the reason sulfur smells show most often in wells in rural areas?

It might be due to the result of a variety of factors.

Chlorination treatments in municipal water systems can cut down the number of bacteria. More sulfate is found in wells in rural areas that serve as feed for SRBs, and higher levels of minerals dissolved make the water inside the tank more robust electrolytes.

This could explain another observed issue; sulfur smells tend to be more potent in homes with water softeners.

Before going into a long-term solution to getting rid of the sulfur smell, let’s look at some other options that might work for you.

If smells are also present in the cold water side of your system, the issue could be with the water source, treatment system, or your plumbing.

It is good to have the water you drink tested frequently(EPA) to identify a range of contaminants, mainly when you depend on an underground well or another private water source.

Also, don’t remove the sacrificial anode and replace it with an insulated plug.

This is likely to eliminate the sulfur smell; however, it comes at reducing your water heater’s lifespan and voiding the warranty.

Setting the water heater to a high temperature such as in the 140-160F range could also help. But, be sure that your plumbing system uses mixing valve to prevent scalding.

This will also kill other bacteria in the tank, like legionella (PDF). As they recommend your entire water heater tank should get to 140 at least once a day.

Use plumbing fixtures to run water and pull the peroxide solution into the pipes.

Then, allow the system to rest for 3 hours before flushing the pipes and tank with fresh water. Like the high-temperature process above, the peroxide shock may destroy bacteria and provide temporary relief.

Though not a 100% efficient solution, an alternative is to replace the magnesium anode with one made of zinc or an aluminum and zinc alloy.

These metals are in the middle of their function as they release their electrons more slowly than magnesium, but they do so enough to safeguard your iron against corrosion.

Some experts avoid aluminum anodes, mainly because the aluminum ions dissolve in tap water, where they could be absorbed into the human body via cooking, drinking, and bathing.

A powered anode rod is one of the best solutions to get rid of the hot water heater egg smell.

These come with a tiny titanium anode that is non-sacrificial and attaches to the water heater to replace the sacrificial anode rod. The rod is connected to the power source and a control module that transforms the 120V AC line voltage into direct current and allows a small amount into the jacket and tank.

Doing this serves the same purpose as a sacrificial anode rod but in a more controlled manner.

Instead of a large number of electrons, which diminishes and fades away over time, The powered anode delivers a regulated flow that is strong enough to resist corrosion but not so powerful that it stimulates SRB growth.

One of the main powered anode rods is by a company called Corro-Protect.

The product was designed to carry a current of 15 milliamps between the tank and into the water. To ensure a constant flow of current in fluctuating conditions, the power control module changes its voltage between 1 to 2 V DC.

If you’re concerned about power consumption, it can vary with the hardness of the water, but it’s usually around 10 kWh or less annually.

Because the powered anode rod was easy to install and highly efficient, it seemed to be the best way of treating the stinky water heater.

Then, the anode must be removed by unscrewing it off on top of the tank using the proper socket wrench (typically 1-1/16″.). When the anode has become stuck in a bind, an impact wrench or breaker bars could be needed.  Most likely, it will be tough to remove, and an impact will be the best way to remove the anode rod. This is the setup we used.

For the Rheem heat-pump water heater we had, the extension socket was required to access the anode just below the compressor and the evaporator coil.

Since sacrificial rods for the anode are often quite long, usually 36 inches. Or more, removing them from the tanks could be difficult for basements with low ceilings. They must be cut to be pulled from the tank and removed. Just be sure not to allow the bottom of the cut piece to drop back to the tank.

After removing the sacrificial anode, this new powered anode made of titanium can be inserted and tightened.

Certain brands of powered anodes use a one 1/4-in. Socket, while some require a bigger socket.

Use the manufacturer’s guidelines for using pipe dope or plumber’s tape on the threads of the new anode. Although, contact between metal and metal (tank and rod threads) is necessary for electrons to move.

After the titanium anode has been installed, both the power source and the control module are connected. One wire of the control module is connected to a connection on the anode, and the other wire goes to the grounding screw of the jacket of the water heater. You may need to drill a hole to run the power cable as we did.

We also added some dielectric grease to protect the connection from rusting.

Once the installation is complete, the tank is filled and flushed and put back into service, with the powered anode rod plugged in.

If an outlet with 120V is in the vicinity of your water heater, then the whole procedure takes just one-half hour. If not, you will need to have a qualified electrician install one.

Powered anode rods can be used in a new water heaters installation or retrofitted depending on the need. From our experience and the research conducted on the web, powered anodes offer almost a 100% solution in stopping and eliminating water heater-related sulfur smells.

In everyday use, odors disappear over a few hours to days as the H2S gets flushed out of the faucets.

After the Corro-Protect installation, we are going on three years of being in service, and there has yet to be any more rotten egg smell.