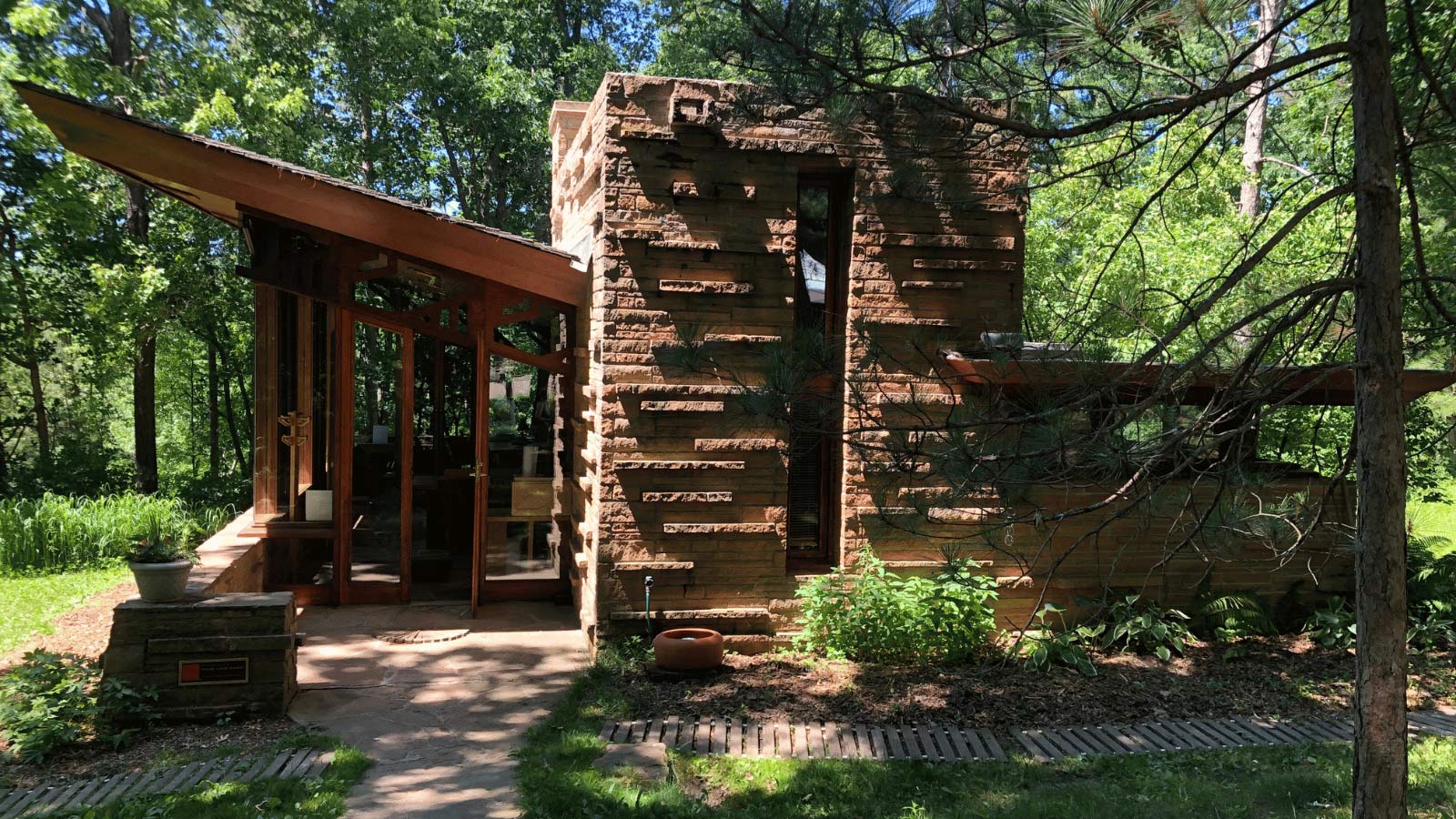 This Frank Lloyd Wright cottage was built in 1958 and is only 880 square feet. Situated within Mirror Lake State Park outside Lake Delton, Wisconsin. Available year-round through the state park as a rental.

The cottage possesses a monumentality that is surprising in such a small structure. With the ability to boil down the essence of FLW’s design philosophy.

Horizontally-layered local sandstone was used for the exterior, interior, and massive central fireplace. The floor and terraces are flagstone.

A huge soaring roof seems to hang from the air without any support. Which frames primary views towards the south and west and opens up the interior to the trees surrounding it.

The one-bedroom is tucked in the rear of the cottage. Meant to be almost a womb to retreat to. Then, upon waking you walk out into the large living room which opens to the world.

Unfortunetly the cottage has a somewhat tragic past. But, lets start at the beginning.

History of the Seth Peterson Cottage

Seth Peterson grew up in Black Earth, Wisconsin. With an early love for Frank’s work.

While many American boys were collecting comic books or action figures, Peterson, at just 8 or 9 years of age, started collecting books, pictures and articles about the famed architect who lived nearby.

We talked about him a lot, Seth and I did

Being close enough to Wright’s Taliesin, he frequently visited the property for concerts. The visits further developed the obsession with Frank Lloyd Wright’s work.

Seth and Frank even shared the same birthday, June 8th.

Even though their lives were divided by many years, Peterson saw something in Wright’s work and his Wisconsin upbringing that resonated with him. Wright was the “movie star” to Peterson.

Bert and Seth would often take the train to Oak Park to visit Frank’s buildings. Once old enough to drive the adventures to different buildings increased.

Driving by any Wright-designed building they could. Bert has stories of all of them.

When Seth graduated high school in 1954 he wanted to pursue working with Frank. And applied to become an apprentice and an architect.

After applying, but never being accepted to Taliesin, the 20-year-old became an operator of computers for the government’s Department of Motor Vehicles.

However, he didn’t let his architectural dream go unfulfilled.

Peterson was able to settle and move into a small home in Lake Delton, but when the structure was destroyed due to a defective heating system.

Peterson decided to get Wright to design a cottage for him.

Frank at the time was 90 years old and working on the Solomon R. Guggenheim Museum in New York. A tiny cottage in Wisconsin didn’t seem worth his time. There were much larger projects to work on.

But, during that time Seth knew that Frank was in need of money. Frank would essentially cash any check that was sent to him. So, Seth mailed Frank a check for $1,000 for the design of his cottage.

The plan worked. Frank cashed the check and now was on the hook for designing the Seth Peterson cottage.

Seth was thrilled that his plan worked, and he was going to finally get to build a FLW home.

Peterson was delighted to see the house come together until he was informed of the tragic announcement of Frank Lloyd Wright’s death. Making Seth’s cottage the last Wisconsin commission done by FLW.

On top of Frank’s death, the building of his cottage was taking its toll on the soon-to-be 24-year-old. He had money issues (most FLW builds went over budget) and had broken up with his fiancee.

As the home was getting closer to its completion in 1960, Peterson ended his own life tragically, depressed over Wright’s passing and personal problems.

You may be wondering if Seth Peterson took his own life at the Frank Lloyd Wright cottage. Especially if you plan on spending a few nights there, rest assured, sources say he died in his parent’s basement in Black Earth, Wisconsin.

After Seth’s tragic death, the cottage was purchased by a Milwaukee family. Bringing the project to completion, but not up to FLW standards.

In 1966 the Mirror Lake State Park purchased land and cottages nearby, including Seth’s. But, they really didn’t know what to do with it.

They demolished the other cabins and boarded up Seth’s until they could figure out what to do.

Unfortunately, FLW fans stole some building materials for souvenirs, and vandals tore down the plywood and made use of the property

In the late 1980s, a woman named Audrey Laatsch was out canoeing on Mirror Lake. Unfortunately, she tipped over and swam to shore. Once there, she scrambled to the top of the hill. Discovering the Frank Lloyd Wright cottage for Seth Peterson entirely by accident.

After checking out the cottage and drying on the roof, she investigated why this fantastic place was left to rot in the woods.

After the research, Audrey organized a restoration campaign to bring the property back to life.

Around the same time, another woman named Joyce Kult wrote an article in Milwaukee Journal Sentinel about the cabin. Stating its condition and enticing interest in restoration. It was in the perfect position on the land, “like a headstone.”

Helping to bring the project closed to what Frank Lloyd Wright had designed, but Seth couldn’t originally afford.

The cottage is available for rental year-round. But, due to the unique nature of the property and FLW name, it is often completely booked a couple of years out.