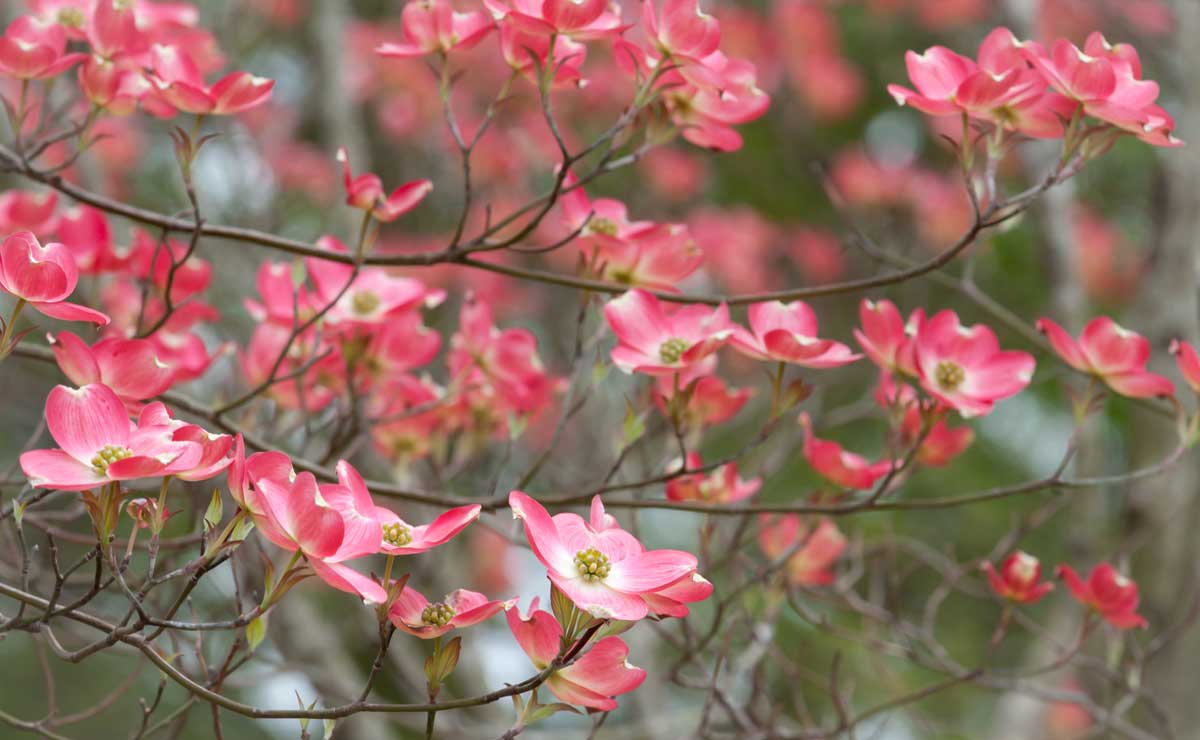 Dogwood tree smell is essential to consider before planting them in your backyard.

Don’t be fooled into thinking this plant will produce the delicate scent of the eponymous pears. The Bradford pear tree notoriously produces flowers that smell like semen and rotten fish.

The Bradford pear tree (or Pyrus calleryana) is a cultivar of the Callery pear tree. Native to China and Vietnam, it was introduced by the USDA in the 1960s (PDF) and is now common across most of the eastern United States.

Despite their unpleasant smell, these deciduous trees were planted throughout American cities during the 20th century because they grow fast, thrive in harsh conditions, and are disease resistant.

Dogwood Trees vs. Bradford Pear: How to Tell the Difference

Since both Dogwood trees and Bradford pear trees are so popular, you’ve likely encountered (and maybe confused) both trees. To tell the difference between these woody plants, observe the following traits:

Bradford pear is an invasive species. This aggressive spreader can cause damage to local environments because they leaf early, obscuring sunlight for native grasses, wildflowers, shrubs, and young trees. Many cities are banning the tree.

If unpleasant smells aren’t enough to deter you from planting Bradford pears, consider the environmental damage caused by invasive species.

Choosing native trees is always better for your yard because they are naturally acclimatized to the local climate and soil conditions. This means they require less maintenance while providing a preferred habitat for native wildlife.

A quick-growing but ‘moody’ plant, Dogwoods can sometimes produce unpleasant scents when unhappy with their growing conditions.

But overall, the biggest thing that will cause your Dogwood tree to smell is if you haven’t acquired a Dogwood tree but instead have a Bradford pear.

Scientists suspect that the noxious smells produced by Bradford pears are caused by toxins such as volatile organic compounds (which are molecularly similar to ammonia), tannins, and phenols. Trimethylamine and dimethylamine both smell like ammonia and are suspected to be the combo behind the Bradford Pear’s fishy odor.

(There is also ammonia in semen, which would help explain the comparison.)

The Importance of Being Fragrant

Dogwood trees rely on insects and birds to reproduce. Scent is an essential tool plants use to attract these pollinators. As such, flowers produce the most aromatic scent when they’re ready for fertilization.

Note: Dogwood berries are not toxic to horses, dogs, cats, and other animals unless consumed in large quantities. Since the berries have a very bitter taste, it is unlikely that your household pets will consume enough berries to cause digestive system issues.

How Long Does the Smell Last

Dogwood trees produce a large amount of pollen when flowering, so even though an actual Dogwood tree should produce pleasant smells, those smells will still be strong. This might be an important trait to consider if you’re prone to allergies or sensitive to smells.

The annual flowering (during which Dogwood trees are fragrant) lasts about two weeks, occurring sometime in early spring to mid-summer. Although two weeks is not a long time, Dogwood trees enjoy an average lifespan of 80 years.

Planting dogwood trees away from household windows will help minimize your exposure to any unwanted smells during the pollination period.

Of the 17 different varieties of dogwood trees native to North America, four types of Dogwood trees are most commonly found in gardens.

The Flowering dogwood (Cornus florida) is native to eastern North America and is one of the most common species. It’s also the state tree of Virginia! It produces pink or white blossoms that bloom mid-Spring.

As the name suggests, the Pacific dogwood is native to western North America. It is also known as Mountain Dogwood. These petals (actually ‘bracts’) can bloom twice per season – once in Spring and late Summer or early Fall.

The Common Dogwood (Cornus sanguinea) is native to Europe and western Asia. It produces globose blackberries, each of which contains a single seed.

Also known as Japanese Dogwood or Chinese Dogwood, the Kousa Dogwood is native to Asia. (Kousa is the Japanese word for Dogwood.) In addition to star-like white blossoms, Kousa Dogwoods produce pink-reddish fruits which attract songbirds.

Again, while some varieties of Dogwood trees might have a bad reputation for producing putrid smells, these trees are likely not, in fact, Dogwood trees. If planted in the proper growing conditions, Dogwoods should produce a strong but pleasant floral scent similar to sweet honeysuckle.

So unless you’ve mistakenly bought a Bradford pear tree, a Dogwood tree isn’t going to leave your backyard smelling like rotten fish!