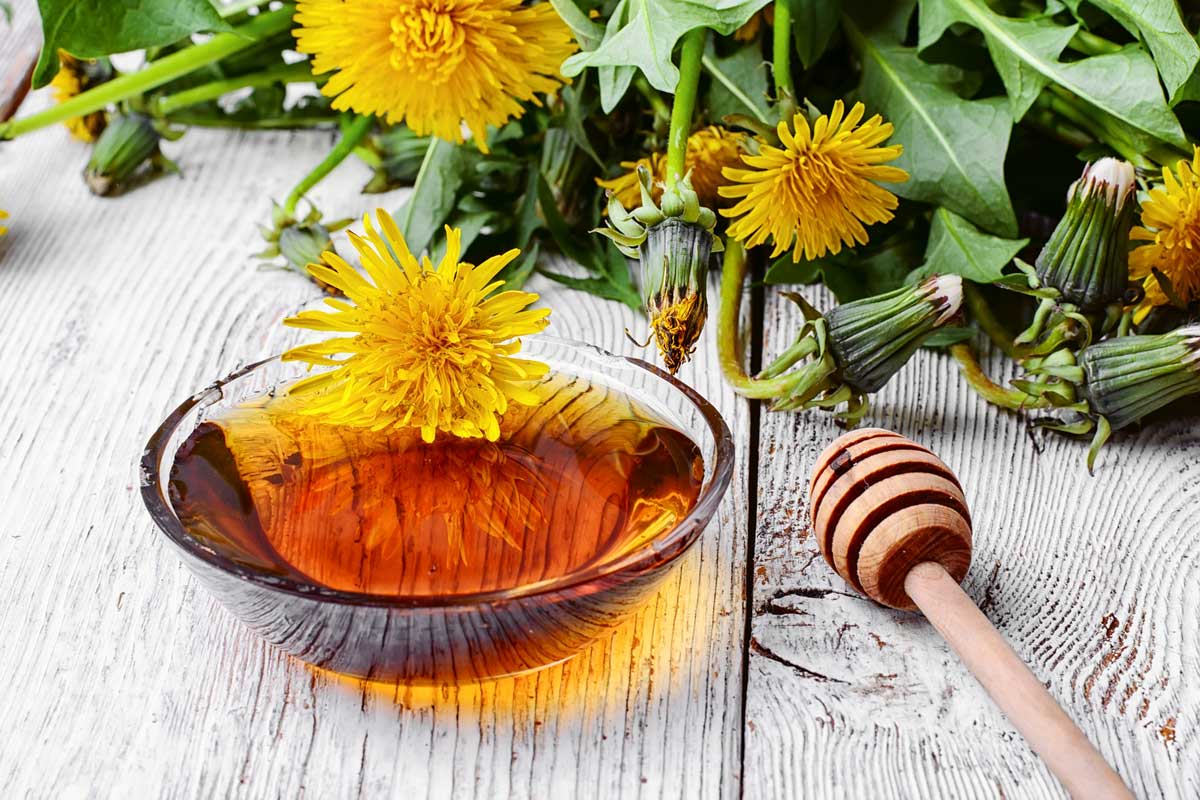 The dandelion flower is an official symbol of spring as it is one of the first flowers to bloom Adding color to an otherwise drab landscape.

Although, most people think of dandelion as a weed. That must be eliminated at all costs! How dare that pesky plant with its stubborn taproot take hold in their yard! These people don’t realize that dandelion flowers are much more than a weed.

The common dandelion (Taraxacum officinale) can be used in various beneficial ways, including in medicine, honey, tea, wine, and ice cream, to name a few. Having held a spiritual meaning for centuries to mean hope, healing, and light.

So let’s see what happens if we leave dandelions to bloom and flourish. They might just become the hero of your yard.

Getting to Know Dandelion

Before getting into what dandelions are good for. We will go over some of the essential info so you will have a good knowledge of the plant without getting too boring.

Where Dandelion Came From

It is believed that dandelion was carried over from Europe on the Mayflower for use as medicine and food. Other countries like Russia, China, and India were also using dandelion to treat various ailments such as digestive and liver problems and skin infections.

Other countries have other names, including cankerwort, milk witch, blowball, monks-head, priest’ s-crown, pee-a-bed, swine’s snout, and more. It seems like they had some fun with this one.

Italians named them “dog pisses,” but for different reasons. They usually found the flowers growing on the sides of the roads.

Dandelion flowers are a part of the Asteraceae (PDF) family, a large group of flowering plants.

They are considered native to North America and Eurasia.

Dandelion leaves can be 2-10 inches long and have a central taproot. The taproot generally penetrates the soil to 6-18 inches deep but can go down to 10-15′ (PDF).

Flower heads are orange and yellow-colored and are open during the day and close at night. Can be up to 2″ in diameter.

The stems are hollow and have a milk-white latex-type material when broken.

Pollinators such as honeybees depend on dandelions for nectar in early spring. Bees start coming out of hibernation around mid-March through May, and this is around the same time dandelion starts to bloom.

Will all the bees die if your neighbor is dead set against the “blasted weed”? The bees will be okay as tree pollen is also a spring nectar and pollen source. Although, we should do everything we can to help the bees, as we depend on them.

Chickens also get great benefits out of dandelion. The greens and flowers will help provide for some deep-colored yolks.

Dandelions mature into spherical seed balls and propagate as wildflowers.

Seeds are created without pollination, making future baby dandelions and parent plants identical genetically. The seeds are aided by wind dispersal or a child making a wish.

The dandelion seed begins to germinate when the soil is damp, and the temperatures are at least 50°F. However, the germination rate is higher when temperatures in the soil are near 77 degrees.

Germination can occur throughout the growing season.

The seedling stage usually lasts 8 to 15 weeks, subject to temperature and growing conditions.

Birds such as goldfinches and house sparrows enjoy eating the seeds and using the fluffy material for nests.

Dandelions have long held meaning for love, happiness, and hope.

The yellow/orange colored petals represent the sun shining on your excellent deeds. Black seeds represent wishes for new beginnings and prosperity. This is the reason newlyweds are often given dandelion.

The way the seeds spread can be thought of as free-spirited and playful.

Dandelion is also a very hardy plant that can withstand drought, pollution, harsh winters, and being trampled on. This means resilience and hope.

The Japanese view them as meaning courage as they can grow just about everywhere.

It is pretty common for people to get dandelion tattoos. Based on the meaning behind them. Typical for those who may be nomads and travel the land. Being found just about anywhere.

Benefits to the Landscape

Most landscapes in the United States are a drab monoculture of grass. It may look nice when adequately manicured but does nothing for biodiversity.

Our entire support system depends on biodiversity. Without it, humans and animals could not survive. Nature provides us with clean water, food, and medicine.

Dandelions play a role in bringing biodiversity into our lawns by attracting bees, moths, birds (hummingbirds are known to line their nests with dandelion), and butterflies and pollinating herbs, fruits, vegetables, and flowers.

Lizards and insects also like to hide under dandelion leaves since they grow into the ground in a dense rosette.

As we destroy natural habitats, the root systems that hold topsoil in place are lost as stormwater or high winds come and wash it away.

They also act as a natural ground cover which helps to help moisture in the soil and keep beneficial bacteria alive.

Dandelion also has strong taproots that dig deeply into even the toughest soil. Which can help repair poor soil by breaking it up to create channels for air and water.

Nutrients like potassium, iron, and calcium are also drawn up from soil depths through the taproot. The plant will take in these nutrients and leave them near the surface soil when it dies and decomposes.

People are often familiar with bees enjoying the nectar, but most don’t know dandelion is edible (be sure to only consume plants from areas not sprayed with weed killer).

You will never look at dandelion the same way once you start eating it. The entire plant can be eaten and offers various nutrients.

Dandelion leaves have vitamins A, E, K, B1, B2, B6, and C. Although; they can have a bitter taste and are best eaten while young. The leaves also have minerals, including iron, magnesium, folate, and copper.

To get the most out of harvesting dandelion, you need to have a plant. Here are some tips on when to pick dandelions:

You’ll be surprised by all the different ways to consume dandelion. Here are some ideas:

Making a jar of dandelion jelly is a great way to celebrate spring. The jelly will become a family favorite in no time. It tastes like honey with a little hint of lemon.

Use it on biscuits, toast, peanut butter and jelly sandwiches, or wherever you would typically use honey.

There are a variety of ways to make jelly. Here is a classic recipe from The 1977 Old Farmer’s Almanac

You can make vegan and gluten-free pancakes using dandelion if you’re health-conscious. Here is the recipe.

Not included in the recipe is that you can throw some fresh dandelion petals on top of them to add some color to the dish.

You can also use dandelion in cupcakes!

You can use the dandelion’s lion-shaped leaves to make a salad! Best picked when young. Otherwise, the green can be bitter.

You can make dandelion infused vinegar that becomes a potent tonic that helps with digestion.

Here is a food.com recipe that will help you make vinegar in 15 mins.

Dandelion honey is an excellent substitute for honey. Especially important for vegans who have a sweet tooth.

The best part is that it is straightforward to make. You need sugar, lemon, water, and dandelion flowers (yellow, not green). The flowers provide a rich floral taste.

This recipe by Vegan on Board seems to have the most five-star reviews.

Dandelion tea can be made using all the parts of the plant. But, using flowers is the most common and best tasting. Flowers create an herbal tea that tastes sweeter than if you used the roots or leaves.

Be careful with drinking dandelion tea. It can have beneficial or potentially negative effects.

There are studies showing it may help Type-2 diabetes, but more research needs to be completed.

Some people could encounter stomach discomfort, diarrhea, heartburn, or allergic reactions when consumed in large quantities.

If you have any health concerns be sure to research them, and if needed, talk to your doctor.

Here is a blog that shows how to make it.

Who doesn’t love soda? You can use dandelion flowers to create homemade soda.

The soda is created with the help of a ginger bug starter, ginger root, lemon, and sugar.

It would make for an excellent experiment for kids! Teaching them about foraging wild plants and fermentation.

The dandelion tincture is often used as a digestive herb. Use a few drops before meals to help prevent heartburn or gas, as it is often viewed as a mild laxative.

It can also support the kidneys and liver and act as a blood purifier.

The list of benefits is surprisingly long. Here is a PDF for further reading.

A dandelion salve is excellent for relieving aches and pains, and sore joints. You can also use the salve on cracked skin as a natural moisturizer.

Here is a video that shows the process of making dandelion salve:

For adults only, dandelion wine!

You’ll need a lot of dandelions to make this happen. Luckily, dandelions are usually plentiful.

A quick rundown of steps involved: Remove the petals, bring sugar and water to boil, let cool, zest orange and lemon, then juice, wine yeast in water, combine in a large jar, and let ferment.

If you enjoy capers, then you’ll be excited to know you can pickle dandelion flower buds. Then, use them as capers on salads, pasta, or a side dish with cheese.

Timing is crucial. You’ll want to pick the flower buds when they are young and have not developed a stem yet.

Don’t be worried about the size, as the smaller flower buds will taste better. The general rule is not to pick a larger flower bud than your fingernail.

Once you have the flower buds picked, you can place them in a jar with salt to ferment.

Dandelion has been used for medicine for centuries and was first written about by Arabian doctors in the 10th and 11th centuries. They used the dandelion to treat spleen and liver disease.

It is well-known as a diuretic, so the French named it “piss-the-bed”.

Dandelion can also help with a range of health issues including:

Although it should be noted there are no published medical studies on the dandelion (most likely because it is a freely available plant that can’t be patented).

View this PDF which explains more of the health benefits of dandelion.

Well, there you have it. Hopefully, this has helped you see that dandelions are much more than just a weed. They were brought to the United States for food and medicine.

The 11 ways to prepare dandelion is just a sample of what you can do with them. You can get even more creative and bake dandelion greens into chips like kale. Or, turn it into a greens powder.

We suggest you pick just one method that interests you most and try it! Master it, share it, then try another.

The dandelion flower needs our help getting out of the stigma of being a useless weed.

Dandelion Tincture in Book: Backyard Medicine: Harvest and Make Your Own Herbal Remedies