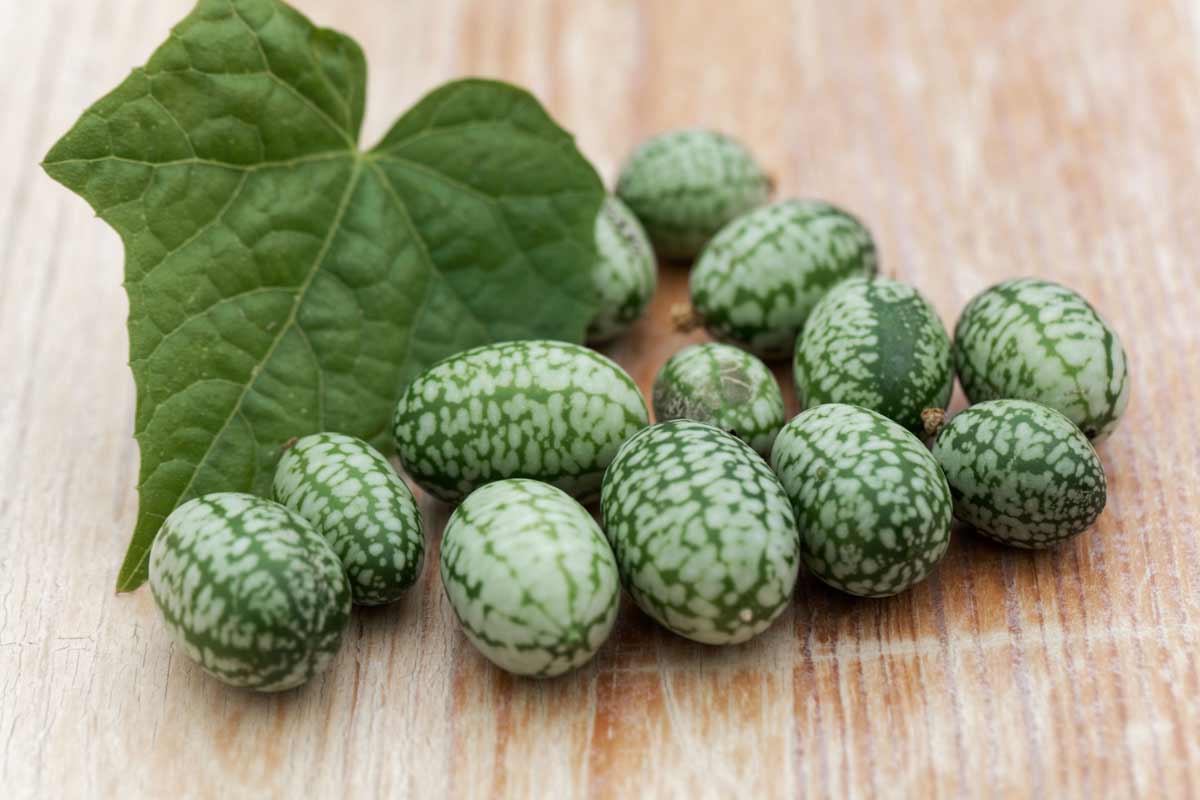 Have you heard of cucamelon? They are becoming a trendy garden crop. Cucumelons are small fruits that resemble baby watermelons.

They’re hard to resist, and many are enjoyed straight from the vine without making it to the kitchen! So how do these inch-long fruits taste? They have a hint of cucumber and a lime-like flavor, despite looking more like miniature watermelons.

Since the pre-colonization era, they’ve grown in Central America and Mexico, known as sandita, little watermelons, pepquinos, or little cucumbers. Cut one open or bite into one, and you will see cucumber-looking flesh and little seeds. They’re tasty and also packed with vitamins.

Contents show
1 Cucamelon at a Glance
2 Overview of How to Grow Cucamelon
3 Best Time to Plant Cucamelon
4 How to Plant
5 How to Start the Seeds Indoors
6 Best Way to Transplant Cucamelon Plants
7 Growing the Cucamelon Plants
8 How to Care for Cucamelon Plants
9 Why a Trellis is Important
10 When to Harvest Cucamelons
11 How to Grow in Containers
12 Make Sure the Plants are Well Pollinated
13 Simple Way to Propagate Cucamelon
14 Saving Cucamelon Seeds
15 Plant Diseases & Pests to Watch Out for
16 Videos
17 Frequently Asked Questions
17.1 How long does it take to grow cucamelon?
17.2 Does mouse melon come back every year?
17.3 Is cucamelon easy to grow?
17.4 What does a cucamelon taste like?
17.5 How do you eat Cucamelons?
17.6 Are cucamelons poisonous to dogs?
17.7 What grows well with Mexican sour gherkin?
17.8 Why are my Cucamelons not growing?

Cucamelon at a Glance

Overview of How to Grow Cucamelon

The cucamelon plant is related to cucumbers, and they’re easy to grow in containers or garden beds.

Although this tender perennial can be sensitive to the frost, cucamelons can live for several seasons if looked after correctly.

They develop an underground tuber throughout the season. When the colder weather rolls in during the fall, you need to dig the tuber out and overwinter it somewhere sheltered.

If you have milder weather without the risk of frost, let it die back and then add mulch to the ground all around the roots, so it can survive the winter and come back to regrow in the spring months.

Then, pot your cucamelons 6 – 8 weeks before the last frost in the spring (if you want to grow tomatoes too, this is also the best time to begin with, the seedlings).

Let the cucamelons start to grow and then harden off the seedlings outside after the last frost is over.

After that, you can plant them.

This fruit prefers humid, warm weather, so once nighttime temperatures have reached above 50 degrees F and zero risk of frost, you can plant them outside.

In hot summer areas, such as Arizona’s low desert, the best time to start them indoors is between January to March and mid-July to August. Plant the transplants outdoors between mid-February and April and mid-August to September.

Cucamelons planted in the spring might not produce fruit in hot climates until the fall brings cooler temperatures.

You might even get both a spring and fall harvest if you can keep it alive over the hottest months.

This crop prefers full sun in all but the hottest areas. If you live somewhere hot, they will do better somewhere sunny that receives shade in the afternoon.

The seeds should be planted between ¼ and ½-inch deep, and the seeds will take a week or two to germinate.

It can be hard to get them started outdoors since the seeds are slow to germinate.

When planting them, keep them no less than a foot apart and choose a well-draining, compost-enriched soil.

How to Start the Seeds Indoors

It’s best to start the seeds about a month before the last anticipated frost date, which is also when you would begin to grow regular cucumbers from seed, well after peppers, tomatoes, and many other crops.

Because cucumbers and other members of the cucumber family don’t tend to transplant well when older, it’s a good idea to ensure they have the best start.

The seeds are planted between ¼ and ½-inch deep, and depending on the temperature, they can germinate for up to 14 days.

The soil should be as close to 70-75 degrees F as possible for the best results.

If the place where you plan to start the seeds tends to be cool or has a draft, it might be a good idea to use a seedling heat mat.

Another idea is to get transplants from a local nursery instead of growing your own from seed.

You can harden these plants off outside after you’re sure the risk of frost is over. Then, after several days of getting used to being outdoors, you can transplant the young plants into well-drained soil.

Although the vines will probably still look spindly and the seedlings will still be small, you will see them grow rapidly as the weather warms up.

Ensure they’re planted at least a foot apart and have a tall trellis in place so the plants can climb.

A trellis will help ensure the cucamelon plants receive a good amount of sunlight and help the soil temperature stay warm. And, it’s easier to pick the fruit if it’s on a trellis.

The vines will grow more than 10 feet tall if you live somewhere with a long, hot summer, so don’t skimp on the vertical space!

These plants are relatively low maintenance once you’ve planted them outside. They don’t need supplemental fertilizers since they’re only light to moderate feeders, except if your soil is of terrible quality.

Don’t plant them in very wet soil either. To ensure the plants can drain well, you may wish to add some sand or perlite to your garden soil.

The plants prefer acidic soil in the range of 6.1 to 6.8 pH. If your soil has a higher pH, check out our guide on making your soil more acidic.

Cucamelons don’t need much additional watering but give them an inch of water a week during the growing season to ensure they don’t dry out.

If you’re living somewhere very hot and dry, you should consider adding mulch to them to hold the moisture in the soil. Regularly check on them, adding water when needed.

How to Care for Cucamelon Plants

Here are some handy tips to make sure your growing cucamelons thrive:

Why a Trellis is Important

Because cucamelon plants are vines that sprawl and can be tricky to contain, you should have a trellis so the tendrils will be able to climb up there as the vines grow.

In addition, a ripe cucamelon on a trellis is easier to see than one on the ground, making it easier to pick the ripe ones.

When to Harvest Cucamelons

You should start to see fruit on your cucamelon plants around 70 days after transplanting them. When the fruits are bright green and firm, and about the size of a small grape, they’re ready to be harvested.

Leaving them on the vine too long will turn yellow and soften.

Picking them often encourages the plant to produce more, while leaving them on the plant past their prime does the opposite.

You can enjoy the harvested fruit just as it is or slice them up for salads. Try them in salsa or pickled. You should be able to keep them for up to a week in the refrigerator.

How to Grow in Containers

A container is a good idea if you’re a small space gardener or live somewhere cold.

Cucamelons tend to do well in containers, and they’re easier to bring indoors during cold spells. Keep the pot in an unheated, cool place until the following growing season.

Cucamelons grow well on the patio, so long as you leave at least a foot between each plant.

Because of this, you will need large containers to grow several plants at once because smaller ones won’t be able to hold more than one plant.

Make Sure the Plants are Well Pollinated

Cucamelons grow both male and female flowers, like other members of the cucumber family. Insects, most often bees, pollinate these flowers. As the bee population declines, melons, cucumbers, and cucamelons are at risk.

To encourage good pollination, it’s a good idea to plant food sources for bees near the cucamelon plants. Also, if natural pollinators are in short supply in your area, you might want to think about hand pollination.

Male flowers will grow on tall stems, while females have a tiny immature fruit on the base. Insert a Q-tip or little paintbrush into a male flower and then use it to hand pollinate each female blossom.

At the end of the growing season, leave several cucamelons on the vine until soft and yellow since this is the perfect time to get seeds.

A simple and affordable method to grow cucamelons is to keep the seeds from the fruit.

Here’s how to propagate:

Cut each overripe mouse melon in half, then scrape the seeds into a glass canning jar. Add some water to the jar and leave it to ferment for two days maximum to remove the gel that covers the seeds and stops germination.

After that, you can remove the pulp and seeds that float on top of the water and rinse off the ones settling on the bottom of the jar.

Rinse the ones from the bottom and put them on a paper plate or paper towel to dry out. Keep them somewhere dry and cool in a paper seed sleeve.

Plant Diseases & Pests to Watch Out for

Cucamelons are robust compared with other similar vining plants. Powdery mildew is the most prevalent disease, yet it’s rarely a big issue.

Efficient air circulation and cautious irrigation to avoid splashing soil spores on the foliage can keep mildew at bay.

Aphids can also impact the plant and may be controlled by organic solutions such as citrus oil and insecticidal soap.

Video by Cooking with Thas. She shares some tips and showcases her plants.

How long does it take to grow cucamelon?

After a cucamelon seedling is planted, it should be ready for harvesting in around 60 to 70 days.

Does mouse melon come back every year?

These plants are usually grown as an annual. But, in tropical climates, they can be a perennial.

Is cucamelon easy to grow?

If you follow the guide above, you will have an excellent chance of having an easy time growing cucamelon. Just ensure the correct spacing, structure, soil pH, and sunlight.

How do you eat Cucamelons?

The cool thing is you can eat the peel—no need for any peeling. You can pick them off the vine and enjoy, pickle them, use them as a garnish, salads or salsas, or stir-fry.

Are cucamelons poisonous to dogs?

Current research says that cucamelon is not toxic to dogs. Although, not sure how many dogs would find them as tasty as humans.

Why are my Cucamelons not growing?

There are usually two main reasons, under-watering and lack of pollination. Review your watering habits and plant some pollinators nearby to ensure better pollination.