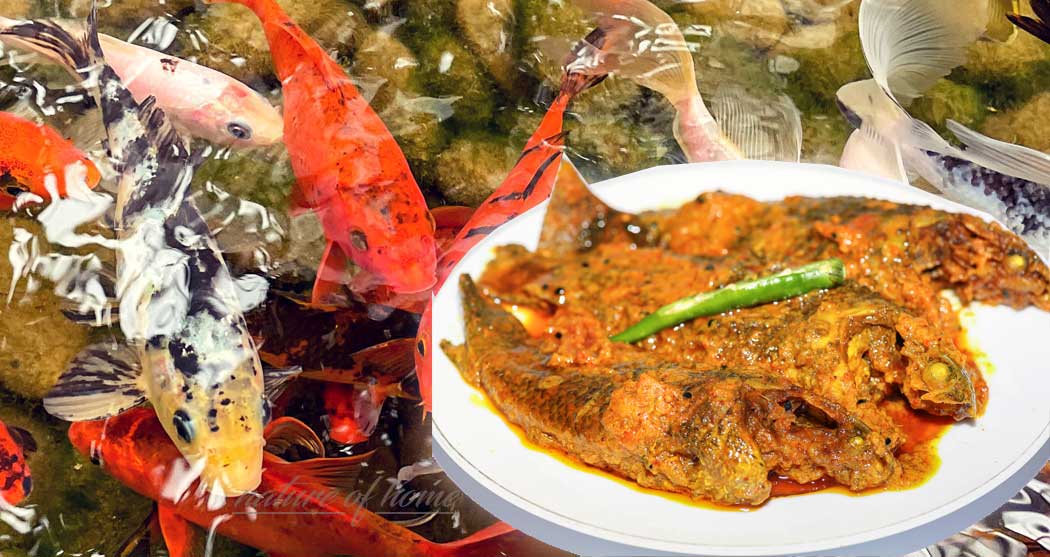 If you’re wondering, “can you eat koi fish” this article is for you. First, you’ll learn about the history of koi and then if it is good or bad to eat them.

Yes, you can indeed eat them, but they are bony and don’t have as many nutrients as fish like salmon and have more significant meaning. Some koi are thought of as pets in koi ponds.

First, Why It’s Not a Good Idea to Eat Koi

Let’s get to know the fish species before we fillet them up.

Koi fish have been a prevalent fish species for ponds, both outdoor and indoor, worldwide for centuries and have astonishing longevity.

You may be surprised to learn that they typically live up to 70 years when kept in captive conditions, while only around 30-40 years in natural conditions.

Koi are revered for their cultural and spiritual significance across many cultures and are often associated with peace, friendship, and prosperity.

There is a belief that the domestication of carp started in China in the year 6200 BC, and the sequencing of mtDNA is evidence that koi were the ultimate descendants of the common carp (Cyprinus carpio).

The present Japanese koi that are becoming popular in backyard ponds are believed to have roots dating into the past in Japan around the turn of the century.

During this time, rice farmers began to catch the carp and raise them in their rice pads to create a valuable and reliable food source.

When carp domestication was made a more widespread practice, Farmers began to be aware of the many beautiful and natural color variations which resulted from cross-breeding between different carp.

The farmers started to see carp less as a food source and more for their intrinsic significance. This change in attitude resulted in a radical shift in the culture of the time.

Then, people began breeding the fish more selectively to produce attractive and valuable species and shifting the fish from a food crop to one of significance.

Koi carps are closely woven into Japan’s national identity. Due to their determination and strength, they are often thought of as Samurai warriors.

They are also thought of as a symbol of spiritual and material abundance, expansion, and luck. In addition, every one of the distinct colors of the koi fish comes with its significance.

One of the earliest varieties is the Kohaku, one of the three main koi varieties.

The Kohaku provides the genetic basis of numerous other varieties but remains a stunning and sought-after variety by itself.

Kohaku have an all-white body with red markings. The white coloration signifies purity, and the contrasting red markings represent the sun. Here is the meaning of a few different varieties:

The koi you choose will represent your personality and uniqueness and your outlook and perspective on life.

As you can see. Japanese koi have significant meaning, much more than a food crop they started as.

In the United States, koi still hold significant meaning. While there is not as much symbolism as in Japan, they are considered decorations and pets.

Pets typically are best not thought of as food. Especially if children are involved, it would be similar to asking if the family dog is edible. While the answer is identical to koi fish, it is edible; but people do not eat their pets.

Studies have shown that fish are intelligent. They can form memories. This is often the case when training to feed koi fish by hand. As the fish recognize you and create the connection that you’re safe and bringing food, they will happily swim to you. Just like a dog greeting you when you come home.

Many homeowners build very expensive koi ponds to view and interact with the fish. The ponds are essentially giant swimming pools for koi.

Koi Are a Poor Choice for Food

Koi fish are classified as bottom-feeders, often recommended to avoid for food. As contaminants like PCBs and Chlordane are usually found on the bottom of lakes and rivers (Such as the Kansas Department of Health and Environment advises anglers to avoid eating carp).

The chemicals get stored in the fish’s fat.

Carp fish are also known to be “bony.” Making processing them difficult.

Finally, many people suggest the taste of koi carp is not good. Since carp rummage through the bottom of ponds, their meat can taste like the mud they ingest.

When you compare the costs, koi fish are expensive due to being thought of as pets and not food. Other species can be much cheaper to raise and eat.

Despite All This, People Still Eat Koi Carp & Recommend It

Koi fish are essentially just colored carp. So the answer to the question, can you eat koi fish, is yes. Carp is regularly consumed by many people.

Anglers often state that koi carp have a bad name. And the fish can be made to taste good, using simple solutions to how bony they are.

It’s fat, muddy and has lots of fish bones, which make eating it a challenging task. On the other hand, its taste really stands out in comparison to other fish and, because you probably won’t eat it elsewhere or at some other time, it might be worth giving it a go. Children usually hate it and are patronizingly told that ‘one has to fully grow up to appreciate the taste of carp’.

culture.pl on Christmas tradition of eating carp. More on this below.

This video will help with the “bony” part of eating koi:

In several Central and Eastern European countries, the principal meal for the Christmas dinner isn’t turkey or duck and carp, but rather carp.

The tradition has roots in its origins dating back to Middle Ages. Fish became popular for Christmas Eve dinner during the 13th century, because Catholics considered fish a fasting food, and Christmas Eve was the last day of the Advent fast.

If you thought that eating carp is the most bizarre aspect of the tradition, wait until you read what they did with them before eating.

According to tradition, families will usually purchase the carp fish live a few days before Christmas at one of the numerous carp stands or stalls. And after that, they place the fish into their bathtub.

This bathing experience is believed to cleanse the fish. Although, there are unintended effects.

Children tend to be enamored with the fish swimming around in the tub and may name the fish. Watching carps swim in the tub is a significant factor in how well-known this tradition has remained throughout the years.

Which made children think twice about devouring their new pet, prompting them to beg for it its release.

Nowadays, however, many families do not keep carp in their bathtubs and instead purchase them dead before placing them in freezers for a few days.

Slovakia and also the Czech Republic typically serve carp with bread and fried with other meals like potato soups, cabbage soups, and salads. In Poland, carp is part of a 12-course meal often served with pierogi or dumplings. In Hungary, the fish can frequently be cooked directly in a fish soup.

There is a significant difference between eating a wild carp in a polluted lake or river versus raising koi fish in your backyard pond for food.

By controlling the body of water, you can make the risks of eating koi carp much lower.

With the use of a bare pond liner with bottom drains, there will be no harmful buildup on the bottom of your pond. All of the waste will get pumped into a series of filters. Cleaning the water to provide a healthy habitat.

You also have control of the food the koi fish are eating. By using high-quality fish food, you can make their meat healthier to eat. It is also possible to feed them other natural foods to make them even more beneficial to eat and adjust the taste of the meat.

This could be as simple as buying a handful of small koi fish. Then, eat them as they get to the optimal size. Or, you can create a really extensive aquaponics system engineered for maximum fish production (PDF).

Regardless of the type of pond, you should ensure the water has high oxygenation and limit stagnant water.

One way to combat the higher cost of koi fish is to let them breed. While this may sound complicated and Japanese breeders get very technical. It can be simple when you don’t mind the colors of the koi and are not looking to create the next koi show champion.

Yes, you can eat koi fish. And when done correctly to ensure healthy fish, it’s not that bad of an idea.

Just be sure not to get attached to your fish. And know that the larger the operation, the more cost and time will go into it.

There might be a great middle-ground by using a good-sized koi pond. You buy a handful of smaller koi fish in the spring. Then, at the end of the pond season, you can eat some of them. If they are not large enough, you can over-winter them for the following year.

This would give you the enjoyment of having fish, providing food, and not having to worry about them surviving during winter.

Unfortunately, there is a good chance you will get attached to your koi fish and find it difficult to eat them. They truly live up to their nickname “the living jewels.”

Are koi fish safe to eat?

It depends on the body of water the fish came out of.

Again it depends on how the fish was raised. The food it eats often will change the taste. Often anglers say koi has a “muddy” taste. Carp are bottom-feeders and sift through pond bottoms for food in the wild. Captive koi fish can taste different.

How do you cook koi fish?

Koi fish is often breaded or fried and added to salads.

Is koi used for sushi?

Like Japan, some countries are rumored to use koi fish as sushi. But, it is generally not a good idea. As a freshwater fish, koi can have liver fluke or parasites and is best cooked.

Although, sushi made of other ingredients is often shaped to look like koi fish.

Is it safe to eat fish from a pond?

This depends on if you know the water quality of the pond. If it is something like a retention pond where stormwater carrying herbicides, etc., run into, then the answer is no. If it’s from a pond that has had water testing done and found free of contaminants and harmful bacteria, it can be safe to eat.

Biomass Production and Nutrient Dynamics in an Aquaponics System: repository.arizona.edu/bitstream/handle/10150/193835/azu_etd_10779_sip1_m.pdf?sequence=1