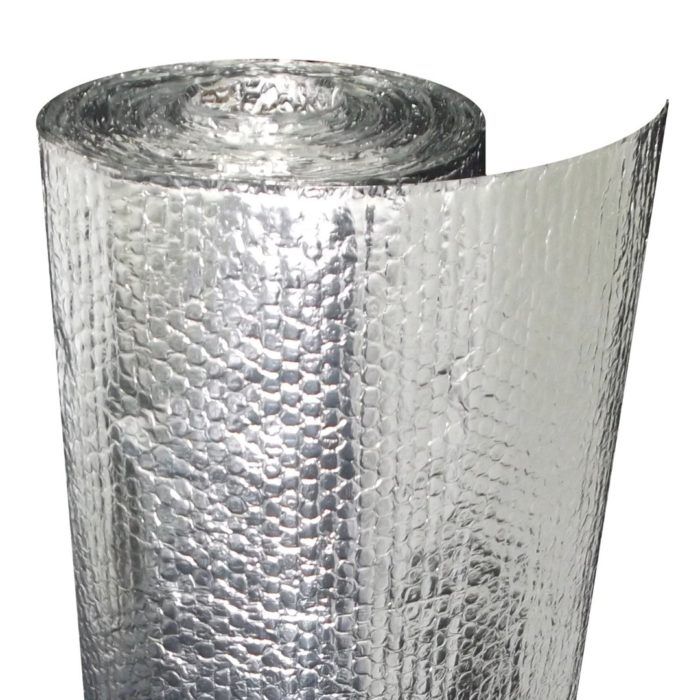 Using bubble wrap insulation can work in some applications, such as adding insulation to old windows. But, it doesn’t make sense to use in a building assembly. Other options can work better and cost less. Read on to learn more.

Jump to a Section

The main reason to use any insulation is to slow the heat transfer from the interior to the exterior or vice versa. So, let’s look at the r-value of bubble insulation.

Although many experts in the building industry, such as Martin Holliday, feel their R-value claims are exaggerated.

A decade ago, when I was the editor of Energy Design Update, I noticed that many manufacturers of foil-faced bubble wrap were promoting their products for use under concrete slabs on grade. In this application, the shiny foil is clearly not facing an air space, so the exaggerated R-value claims made by bubble-wrap manufacturers were particularly outrageous. My article exposing the bubble-wrap scammers appeared in the September 2003 issue of EDU.

After these lies were publicized, three manufacturers wrote letters to EDU apologizing for the “oversights” and “typographical errors” that appeared on their websites.

The lines get blurry when manufacturers compare building assembly R-values and product R-values.

When foam insulation R-value is rated, it is the material itself. So an r-10 foam board means that one building component has an R-10 value. Minus if it degrades over time like XPS foam insulation. The blowing agent is slowly released over time, and an R-10 foam will go down to about R-8. This can also happen with closed-cell spray foam r-values.

Building assembly r-value is the total R-value of the assembly. This could be a wall with sheathing, siding, air space, insulation, and gypsum board. That r-value would be much higher than the insulation itself.

Insulation manufacturers were confusing consumers with r-value due to using building assembly r-value to promote their products.

The FTC came out with r-value rules to create federal laws (PDF) to combat this. This goes over ways manufacturers are allowed to advertise and consider things like aging, settling, and exaggerated energy savings.

Suppose you look at double bubble wrap insulation’s technical details that claim an R-8 value. In that case, the manufacturer includes a 2″ air space in the assembly (air spaces are insulating).

So at the surface, the bubble insulation may look better with less material thickness. But, in reality, it is not an apples-to-apples comparison.

When you compare both products and don’t allow for assembly values foam board insulation is often the clear winner.

If anyone says otherwise, take a very close look at how they calculate their numbers. They will most likely include an air gap, which is misleading.

In 2009 the FTC made three announcements to prevent this from happening.

For example, the defendants claimed Insul-Tarp’s R-value is 7.54, but in reality Insul-Tarp’s R-value could not be more than 2. The FTC’s complaint charges the defendants with violating the FTC Act and the R-value Rule by failing to base their product’s R-value claims on required testing procedures, failing to provide consumers with the required R-value disclosures, and failing correctly to pair statements about the purported R-value and thickness of their product needed to achieve the claimed R-value.

Some companies that continue to sell bubble wrap for insulation have tried to get around these rules by not stating an r-value. Maybe in hopes, the consumer will not do any research to find out how well it will work.

Always make sure there is verifiable data to back up any r-value claims.

Most also include foil facing which acts as a vapor barrier. Used in suitable applications, vapor barriers are great. Used wrong, they can turn into a nightmare.

Nowadays, the bulk of the remaining confusion over foil-faced bubble wrap is about the insulation of ducts.

Since construction codes are becoming stricter, many states now require ducts to include R-8 insulation.

Instead of promoting the bubble wraps to concrete builders, many producers are marketing it to HVAC contractors to install duct insulation quickly.

Online advertisements for “R8 bubble wrap duct insulation” lure unwary contractors into marketers’ traps. The claim that bubble wrap can attain R-4, R-6, or even R-8 when used for insulating ducts is built on a seldom-used installation method that requires contractors to set up several spacers to ensure a consistent air gap between the pipe and bubble wrap.

This kind of insulation is fiddly and won’t be long-lasting. The manufacturers don’t care about whether the installation works, but they’re basing their sales on confusion and contractors’ misperceptions.

Very few contractors take the time to research the differences between R-values and the entire assemblies’ R-values.

Effective duct insulation (the type that has an R-value instead of one dependent upon R-values of airspace) is typically made of fiberglass insulation with a vapor barrier facing.

Here are the links to two brands:

Ensure the model and brand of duct insulation meet the R-value needed for local building codes.

Foil bubble wrap insulation can work as a radiant barrier an air seal. It also will provide a small amount of R-value. Just be sure not to fall prey to manufacturers claiming high numbers without verifying how they got their data.

Other common materials like foam board insulation (option of foil faced for a radiant barrier) can be used for higher performance and less cost.